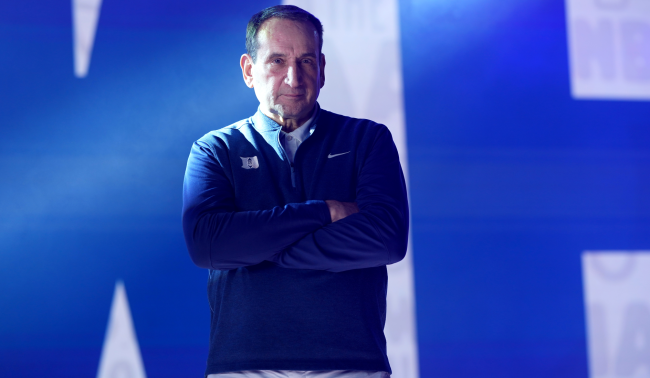 Love him or loathe him, there’s really no argument to be had regarding how successful Mike Krzyzewski has been as the head coach of the Duke Blue Devils.

The 75-year-old coach has had a run like very few coaches in any sport.

Heck, the guy was inducted into the College Basketball Hall of Fame in 2006! He’s been coaching Duke for 16 years SINCE HIS INDUCTION!

So it is certainly understandable for Mike Krzyzewski to have just as many fans who love him and all he has accomplished as those who can’t stand (probably for many of these same reasons).

However… there should probably be limits to one’s fandom of a single human being.

For example, this Duke basketball fan who got a gigantic tattoo of Mike Krzyzewski’s head on his leg.

via @redditCBB: "My mom just texted me a pic of my uncle’s new tattoo…"

If I woke up with this on my leg, I think I'd have to just amputate… pic.twitter.com/GK6E6Cheyd

At least that is the prevailing sentiment by many people on Reddit and Twitter who were left aghast at the striking image of Coach K’s face.

“Honestly at first glance I thought it was Mike Huckabee,” one person commented.

“Dr. Evil was my first thought,” added another.

“I’m getting a big Alfred Hitchcock vibe from this tattoo myself,” someone else wrote.

“I can’t believe someone would do this to your poor uncle against his will. Is he pressing charges?” another asked.

And check this out, according to the person who posted the picture of the Coach K tattoo, “Apparently it’s not even finished!”

A perfect tribute to a young Howard Cosell.