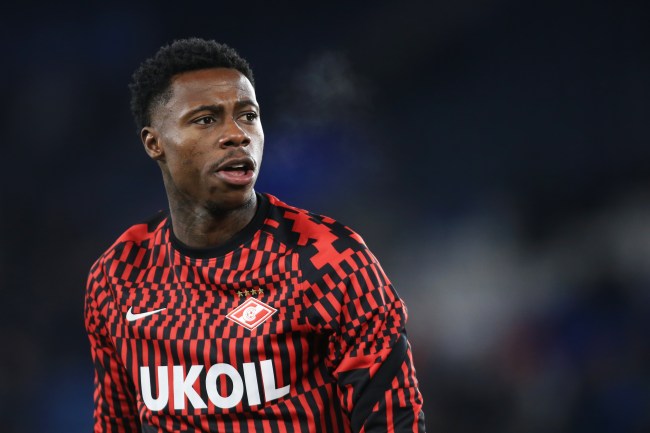 Dutch footballer Quincy Promes used to be known as that guy you pulled in every Fifa Ultimate Team pack even though he never fit in any squad build. Now he’ll probably be better known as the guy whose once-promising football career ended because he stabbed his cousin in the knee.

Quincy Promes was once named Footballer of the Year in the Russian Premier League by multiple outlets and once led the league in goalscoring. He was even Ajax’s leading scoring a couple of seasons ago before their season was cut short by COVID.

He has since moved back to Spartak Moscow, but might not be around for the team much longer after prosecutors decided to go ahead with the charges.

The incident reportedly occurred at a family party in a town outside of Amsterdam when an argument led Promes to stab his cousin in the knee. Unsurprisingly, Twitter thinks this whole thing is hilarious and has already begun to roast Promes over the incident and his potential stay in prison.

His friends when he tells them “love you like family cuz” pic.twitter.com/uuPu4PW8ig

Quincy Promes has signed a 15 year deal with Prison FC✅✍️

There was, however, at least one person on Twitter who could see where Promes was coming from.

We all have that one cousin tbh 🤷

One thing’s for sure. I wouldn’t want my favorite team to run into this Prison FC squad in the Champions League.

With this team we can get to the champions league final pic.twitter.com/iZQTpHBeXJ

At the end of the day, I think the real lesson to be learned here is that should skip family gatherings. You never know which one will be the one where you stab your cousin and ruin your career.