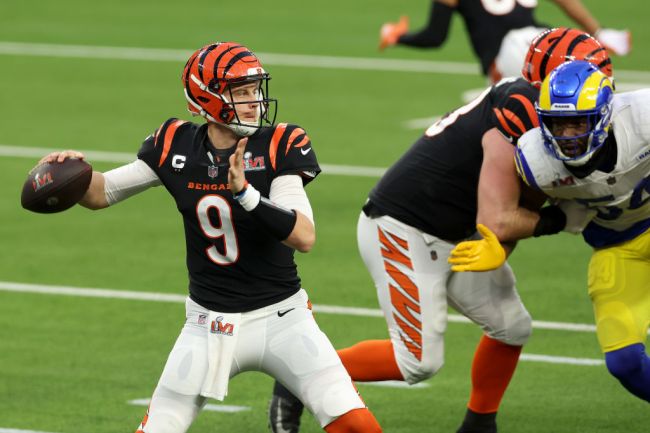 With teams having had a few months to lock down any free agents they were interested in, you wouldn’t expect many big names to still be available. However, there are a few receivers with impressive resumes still hanging around in free agency.

Now it seems like there’s one star whose availability could change some time soon. Odell Beckham Jr has been linked to a few teams throughout the offseason, including a potential return to the Browns or Rams, but a surprise team may have entered the race for Odell.

Yesterday, Cincinnati Bengals quarterback Joe Burrow posted a picture from OTA’s on his Instagram with the caption “My spider sense is starting to tingle a bit”. Then Odell responded with “The one”.

Odell would join a group of pass catchers that is already loaded with talent for the Cincinnati Bengals. With Ja’Marr Chase, Tee Higgins, Tyler Boyd, and Hayden Hurst on the roster, Joe Burrow is going to have plenty of options to throw to this season even if they don’t add another receiver.

It’s hard to see exactly how Odell fits in with all of the talent already available to the Bengals, but the situation isn’t all that different from the one he would find with the Rams.

Odell Beckham Jr has been expected to land with the Rams for much of the offseason, but they already have Cooper Kupp, Allen Robinson, Van Jefferson, and Tyler Higbee set to form a formidable group of pass catchers. With such similar situations, Odell’s decision between the Rams and Bengals may come down to which QB he prefers.

In that case, it wouldn’t be all that much of a surprise if he chooses to play with his fellow LSU Tiger in Joe Burrow.