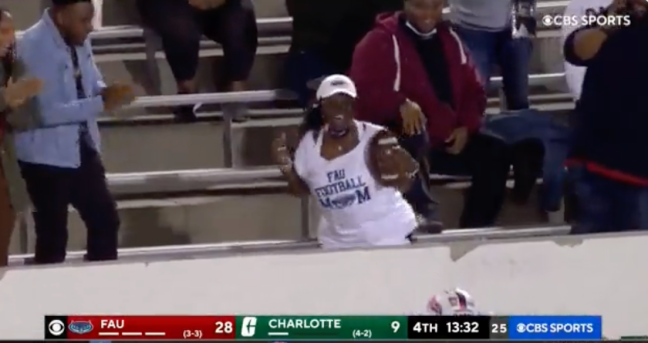 FAU dominated Charlotte on Thursday night by a score of 38-9. While the game itself wasn’t too entertaining, there was one moment early in the fourth quarter that’s absolutely worth discussing.

FAU safety Ahman Ross has been waiting for his first career interception for quite a while since arriving in Boca Raton in 2017, and it finally came on Thursday night.

While it was your standard interception across the middle of the field, it was Ross’ celebration that was the standout moment.

Ross clearly had his celebration planned out as he immediately sprinted to his mom, tossed her the ball, and gave her a high-five.

That one’s for mom.

That’s what it’s all about right there. Just a son showing some love to his mom. Instead of running to the sideline to get donned with some ridiculous turnover chain, Ross wanted to show some appreciation for his mother, and that’s exactly what he did.

Ross had a stellar game on Thursday also picking up a season-high seven tackles in the Owls’ win on the road.