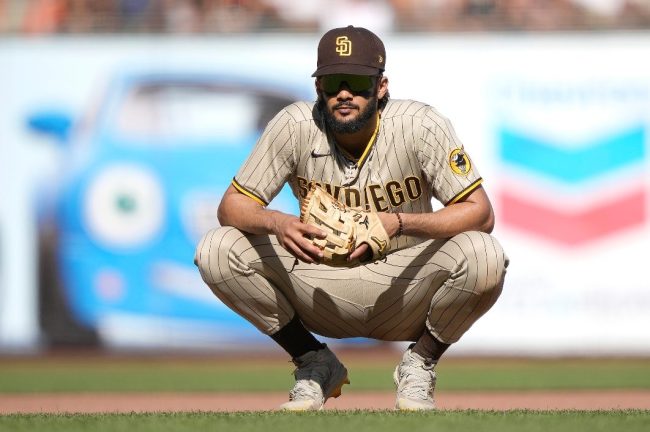 The baseball world was hit hard over the weekend with the news of Fernando Tatis Jr. getting served a suspension. After spending the majority of the season recovering from a wrist injury, the San Diego Padres star will now miss the next 80 games. Although this is something he can surely bounce back from, former New York Yankees legend Alex Rodriguez finally weighs in on the situation.

A-Rod Wishes Fernando Tatis Jr. Learned From His Own Mistakes

During a segment on ESPN2, A-Rod couldn’t help but send a message in the hopes it would reach Tatis. During his time with the Yankees, Rodriguez was also suspended for using PEDs as well. Steroid use has been an issue in the MLB for years and Alex Rodriguez is likely not going to the Hall of Fame because of it. He clearly feels bad for Fernando Tatis Jr., as he will likely suffer the same fate. Talkin’ Baseball shares a video with A-Rod’s full quote. Watch below.

A-Rod says he wishes young players like Tatis would learn from his stupidity pic.twitter.com/4AHz98Ifr0

At the end of the day, this is something young players need to hear. Although Tatis claims he was simply using a cream to cure ringworm, the MLB saw fit to suspend him anyway. It’s a terrible look for Fernando Tatis Jr., as the suspension not only affects him, but the Padres’ World Series hopes as well.

As of this post, San Diego has just 44 games left on the schedule. Even though the Padres will be without Fernando Tatis Jr. for the rest of this season, he will be able to return early in 2023. Considering he is just 23 years old and the front office added Juan Soto and Josh Bell to the lineup, San Diego will still be a solid team next year. Hopefully, A-Rod’s message reaches Tatis and the other young stars in the MLB. If not, then we could see more unnecessary suspensions down the road.