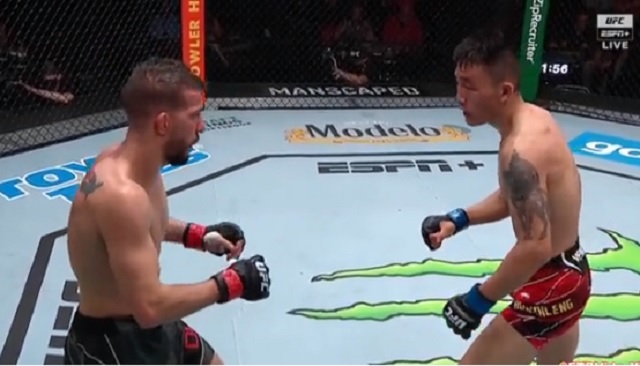 Cody Durden found himself in the winner’s circle on Saturday but people are angry at him over his postfight comments.

After his unanimous decision win against Chinese fighter Qileng Aori, Durden made an awkward comment about sending his opponent back to China.

"I had to send him back to China where he came from" -Cody Durden … Daniel Cormier didn't know what to say so there was an awkward pause for like 5 seconds LMAO! pic.twitter.com/Au4p2qeCA2

Freedom of speech definitely has it pros and cons. Pros being freedom and cons being stupid people

I don’t like Cody Durden racist comment in his interview. Should I smash this guy for my UFC debut? @UFCEurope @ufc

Well that dudes a cunt. #ufcvegas43

I guess he won't be getting those IG followers now. Ouch. #forgivemyfriendhesdrunk #UFCVegas43

Such a bozo smh

Dudes a real POS, I’ll gladly punch him in the face!! 😈 https://t.co/McLXd8puSh

Durden is like the flyweight Colby, if Colby had 0 striking and ground game