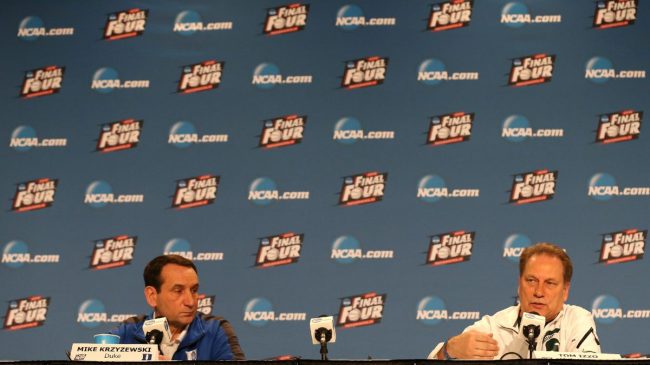 Sunday’s NCAA Tournament game between Michigan State and Duke represents a chance for one storied college basketball program to advance to the Sweet 16.

Mike Krzyzewski is coaching his final season in Durham. The future Hall of Famer has a laundry list of accomplishment.

In 42 seasons with the Blue Devils, Coach K has been named ACC Coach of the Year five times. He’s led Duke to 38 NCAA Tournaments, 12 Final Fours, and five national titles. Krzyzewski belongs on the Mount Rushmore of college basketball coaches.

Coach K is hoping to keep his final season alive, but a familiar foe is standing in the way.

Over the years, he’s formed a healthy rivalry with Michigan State head coach Tom Izzo. Izzo has been with the Spartans for 27 seasons, leading the team to eight Final Fours and one national championship.

In that time, the two coaches have faced off 15 times. Number 16 will be the last.

Coach K has gotten the best of Izzo over the years. He’s posted a 12-3 record against the Spartans with Izzo at the helm.

These two coaches have met six times in postseason play, the most NCAA Tournament matchups between a pair of college coaches all time.

With a matchup of this magnitude, the basketball world is taking notice.

.@MSU_Basketball vs @DukeMBB & that means 2 legends matching hoop smarts Tom Izzo winningest coach in the history of @B1GMBBall & Coach K the all time leader in wins 1199.Will he get 1200 tonight or will this be his last game as a college leader ? 11-9 early with Sparty up.

A lot is made about Tom Izzo's record against Coach K, but Izzo is 2-3 against Duke in the NCAA Tournament. Also, Coach K has lost 30 NCAA Tournament games. Only two coaches have eliminated twice: Jim Calhoun… and Tom Izzo.

Coach K on Izzo: "He's been a great, great, friend and I admire the heck out of him."

Two great coaches and two great teams playing each other.

Duke's Mike Krzyzewski is 12-3 against Michigan State’s Tom Izzo. Tonight's game will be the sixth NCAA tournament meeting between a pair of coaches, the most ever. https://t.co/b3WwJ8Q2zF

24 years later, it's Tom Izzo vs. Mike Krzyzewski for the 16th and final time pic.twitter.com/k5K631aiRR

Tom Izzo when he sees Coach K on Sunday pic.twitter.com/i2VaxaQzWK

Tom Izzo if he ends the career of Coach K tonight: pic.twitter.com/bceo4ATkYN

Tom Izzo and Mike Krzyzewski have combined for 151 NCAA Tournament wins, the most ever between two coaches entering a head-to-head tournament matchup.

Two Hall of Famers going at it for the final time 👏@MSU_Basketball @DukeMBB #MarchMadness pic.twitter.com/6NUmAz1ZLt

Once more, with feeling, for the these two.

Setting the table for Izzo vs. K, for the 16th and final time. No two coaches have met more frequently in NCAAT history than these two. They also combine for 151 NCAAT wins—an NCAA record.

Two of the greatest coaches in men's basketball history face off later today.

Who would you rather play for: Tom Izzo or Coach K? 🤔 pic.twitter.com/zcehOcCKN9

Sunday, they match up for a 16th and perhaps final time.

This @DukeMBB and @MSU_Basketball could be a classic 🍿

Coach K and Tom Izzo will face each other for the final time on Sunday.

20 combined Final Four appearances between these two Hall of Famers.

Coach K and Tom Izzo embraced briefly before their last matchup ever.

Izzo and Coach K going at it in #MarchMadness game is pure basketball at its best.

One of these coaches will leave with a win to advance to the next round of the Big Dance. The other will go out a loser in their final matchup.