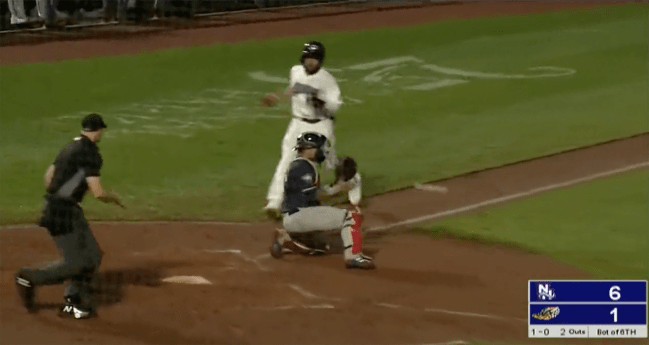 A catcher’s job is to be the first and last line of defense against a run being scored. Whether it be framing balls and strikes or making a bang-bang play at the plate, a catcher is at the forefront of every single play that happens on the diamond.

That was certainly the case in New Hampshire over the weekend. 26-year-old Fisher Cats catcher Chris Bec pulled off one of, if not the funniest baseball plays of the year.

With a significant lead in the bottom of the sixth inning, New Hampshire nearly allowed the Akron RubberDucks to get one back. Bec didn’t.

After a ball was knocked through the right side of the infield, the Fisher Cats right fielder threw home to try and get the runner at the plate. His throw was in time but the Akron runner, George Valera, dodged the tag.

While he avoided getting out initially, he could not escape his eventual doom. As Valera tried to work his way back toward the plate, Bec did not allow him to get there. To block the plate, he used an unusual move.

Bec literally sat down on home plate, criss-cross applesauce style. Tena did not have any opportunity to even get a finger on the plate and was tagged out.

It was a hilarious, but highly effective move. Take a look:

Surely this can’t be a first, but hopefully it is not the last. What a hilarious moment!