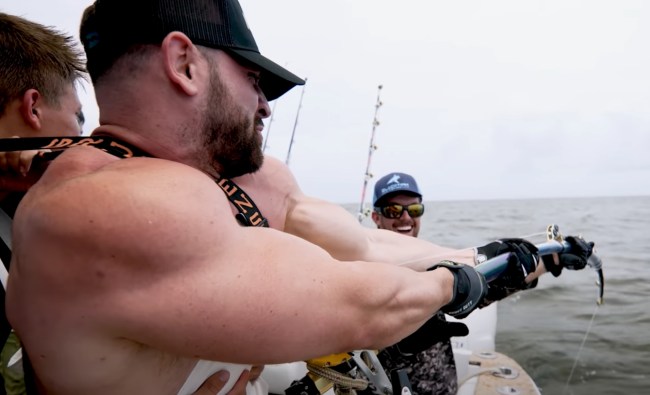 The waters of Florida are home to some of the largest Goliath Grouper on the planet. The all-tackle IGFA world record for Goliath Grouper is a 680-pound fish that was caught on May 20, 1961, off Fernandina Beach, Florida using a Spanish Mackerel as bait and that record likely would’ve been broken by now if this wasn’t a protected species, meaning anglers aren’t able to keep them and weigh them anymore.

Goliath Grouper are the largest species of Grouper and they can measure up to 8-feet-long and weigh close to 1,000-pounds. They are said to be delicious to eat but they’ve been protected in the USA for so long I’ve never actually spoken to anyone that’s admitted to eating this fish.

Josh from BlacktipH has caught some massive Goliaths on his YouTube channel over the years and for his latest episode he invited YouTubers Bradley Martyn (2.51 million subscribers) and The NELK Boys (4.94 million subscribers) out to catch some of these giants. They also reeled in some large sharks including a bull shark, sandbar shark, and a silky shark. It’s pretty interesting to see a man as jacked as Bradley struggling to fight these fish, it really puts it in perspective how strong they are.

Here’s that same crew wrestling a 400-pound alligator in Florida a week ago:

Completely unrelated, I stumbled upon this video recently and shared it on Twitter last night. This dude is fishing for catfish with a friggin snake! He releases it into the mud hole and the snake drives the catfish onto land. I 100% did NOT expect any of these fish to be so big:

That reminds me of a clip that went viral about six months ago where someone used Diet Coke and Mentos to catch those same catfish. Apparently, the chemical reaction of those two things sucks the oxygen out of the muddy water and drives the catfish to the surface.

There must be just thousands of those catfish in the mud if they are able to catch these fish using pretty much any conceivable trick on the planet.