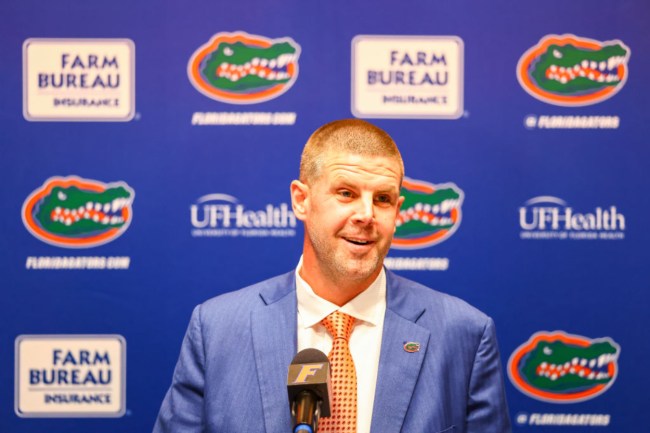 The Florida Gators could have a new trademarked slogan heading into the 2022 football season.

Billy Napier, who was hired as the newest head coach of the Gators in November of 2021, has used the phrase “scared money don’t make money” in the past. The university seems to like the saying as well as it has reportedly filed for the trademark of the phrase.

Napier went viral last fall when he used it after a game when he was the head coach at Louisiana. The quote isn’t something he himself came up with, however, it’s a lyric from Young Jeezy’s song ‘Scared Money.’

The University of Florida has now filed for the trademark: “Scared money don’t make money” as said by their football coach Billy Napier.

The exact quote comes from Young Jeezy in his track “Scared Money” from 2009.@JoshGerben first with filing news. https://t.co/KXtPFMCNV4

Napier was hired to bring an entirely new energy into the Florida football program, and the university filing for the trademark of a famous rap lyric certainly shows that it’s ready to fully jump on board with Napier’s style.

Napier managed to go 40-12in four seasons at Louisiana and Gator fans are hoping he brings some exciting football to The Swamp, something they haven’t seen in quite a few years.