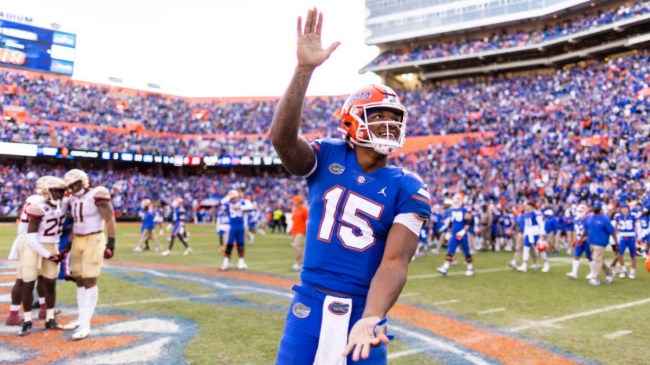 Anthony Richardson and the Florida Gators haven’t seen their season go the way they expected early in the year.

The season began with a big upset win over Utah that quickly vaults them into the Top 25, but they haven’t been able to follow up that success. They’ve gone 3-3 since that win, dropping matchups against Kentucky, Tennessee, and LSU.

As the team has struggled, so has Richardson. He has only thrown 6 touchdowns this season while also throwing 7 intereceptions and has added 6 rushing touchdowns.

It seems that despite his struggles, he has recently signed a major NIL deal. According to On3 Sports, Richardson has signed an NIL deal with Gatorade.

Anthony Richardson has become the first Florida athlete to sign an NIL deal with Gatorade. The sports drink was first developed in Gainesville in 1965.

The QB is promoting the SEC's Game Day Challenge in partnership with Gatorade.

Surprisingly, Richardson is the first Florida Gator to sign an NIL deal with the sports drink company. The company began back in 1965 when researchers designed a drink to help the Florida Gators’ athletes replenish carbs and electrolytes during competition.

Richardson will spend plenty of time in the spotlight over the next few months. Florida still has games left against Georgia, Texas A&M, and Florida State that should get plenty of attention. Then he’ll be one of the more interesting prospects for the 2023 NFL Draft.

At one point this season, Richardson was being projected as a top 5 pick. Since then his stock has definitely dropped, but it remains to be seen exactly where it will settle.

Until then, he’ll get to represent Gatorade’s brand as a member of the team that the drink was originally designed to help out.