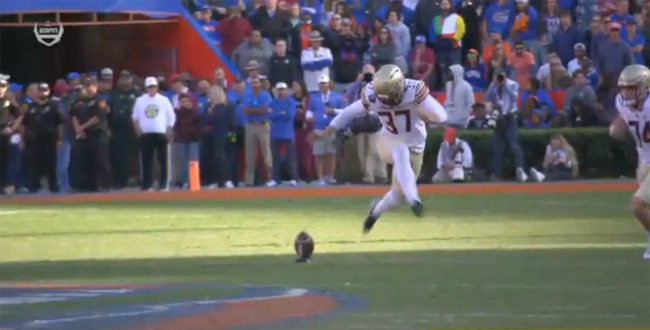 Florida State did its best to make a comeback in the fourth quarter against Florida. It came awfully close but ended up failing in hilarious fashion and lost by three.

After scoring a touchdown to make the game 24-21, the Seminoles lined up to try and get the ball back. What happened next made for the worst onside kick of all-time— if you can even call it a kick.

Redshirt junior Parker Grothaus took his approach, stepped into the kick and swung his dominant leg forward at the ball. The only problem was that his foot came completely over the top and did not even come close to clean contact the football.

Because the kick was unsuccessful, Florida took over. The Gators proceeded to kneel out the clock and win the game, reaching bowl eligibility with an in-state rivalry win.

The entire sequence was hilarious. But itwas even funnier when called in a foreign language.

On the Russian broadcast of the Sunshine State Showdown, the announcers could not help but laugh hysterically. It’s pure gold, take a listen:

As called on Russian TV: pic.twitter.com/hymbcRpEdW

Russian television makes everything funnier and this was hilarious to begin with. Thank you for providing us with this wonderful treat, Florida State.