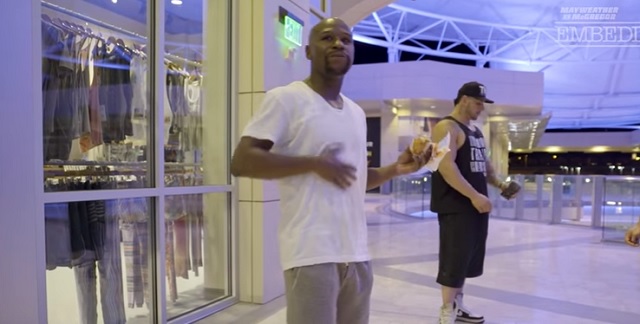 Floyd Mayweather doesn’t appear to be taking his fight with Conor McGregor too seriously. In this week’s episode of UFC Embedded, the 49-0 boxer was spotted eating a Whopper from Burger King and mocking his opponent while doing it.

Not only has Mayweather been eating fast food but he’s also spending late nights and his newly opened Vegas strip club every night before the fight.

one week before he will step into the ring for perhaps the final time in his career to face Conor McGregor, Floyd Mayweather is sitting in the corner of a strip club at 3:30 a.m.

“He’s here every night,” said one staff member at Girl Collection, the Las Vegas strip club Mayweather opened three months ago. “He wants to make sure everything is running smoothly.”

Mayweather, who says he hasn’t had a lap dance in 20 years, takes in the scene from a couch in the corner of the club while dancers perform for him and his guests. He said he will be at the club every night leading up to the fight, giving fans willing to pay the $50 cover fee, which doesn’t include a two-drink minimum that pushes the admission price around $100, a chance to see him in-person during fight week.

“It’s going to be the craziest week we’ve ever had,” said one of the dancers at the club. “I’m already planning a vacation with the money I’m going to be making that week.”

Mayweather can do whatever he wants leading up to this fight and will still probably beat McGregor handily.