Floyd Mayweather And Conor McGregor Reportedly In Talks For A Rematch 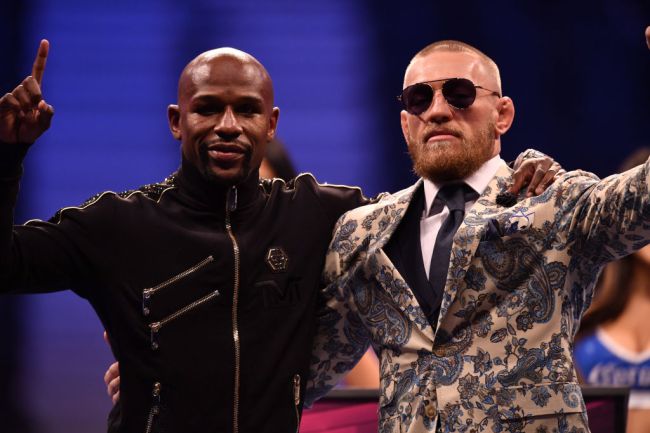 Nearly 5 years ago, Conor McGregor and Floyd Mayweather met in one of the most lucrative boxing matches of all time. Now they are reportedly discussing the possibility of setting up a rematch.

Today, FightHype reported that the two are discussing a rematch as Mayweather eyes another big payday.

Earlier today, McGregor made his feelings on the rematch clear as he posted a picture from the first fight with the caption “I accept”.

In their first matchup, McGregor found some early success as Mayweather slowly worked his way into the fight. The fight starter to turn in round 4 and Mayweather took control from there. By round 9, Mayweather was landing just about anything he wanted and he eventually stopped McGregor in round 10.

While it wasn’t necessarily the most competitive fight, it was certainly a lucrative one. McGregor reportedly made $100 million for that first fight while Mayweather brought home $280 million.

With Mayweather recently revealing that he wants to own an NBA, a fight with McGregor would make a lot of sense for him. Another payday worth nearly $300 million certainly wouldn’t hurt as he attempts to become an NBA owner.

It would also make sense for both men based on where they are in their careers. Mayweather is mostly just interested in money fights and McGregor is probably the highest profile fight available to him right now.

McGregor is coming off of back to back stoppage losses to Dustin Poirier that have left him with few options for interesting fights in the UFC that would provide him with a big payday.

With McGregor still recovering from the leg injury he suffered in the second Poirier fight, it would likely be some time before we see him fight again, but it appears that next fight could be a rematch against Floyd Mayweather.