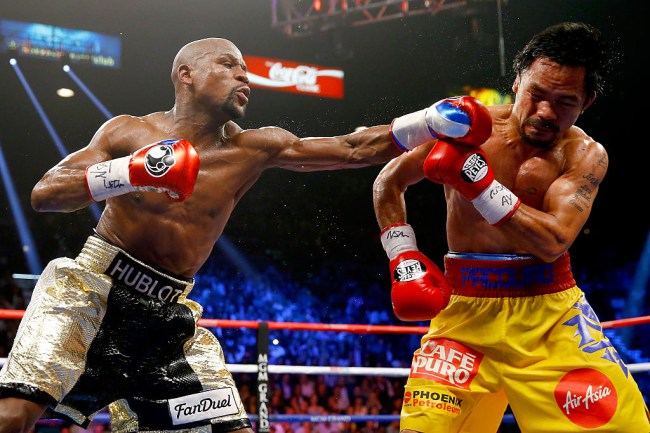 Jack Ma is the founder of Chinese e-commerce giant Alibaba. Jack Ma is rich. How rich you ask? Like so filthy rich that he can afford to pay Manny Pacquiao to be his sparring coach. According to Fortune, Jack Ma has a net worth of $41.8 billion.

Despite retiring at age 55, Ma is the richest person in China. Retiring gave Ma the free time to spar with Manny Pacquiao and trash talk to Floyd Mayweather.

Pacquiao tweeted out a video of Ma throwing punches, and Manny said: “Floyd Mayweather, if you want a real fight, fight me. If you want an exhibition, my guy, my friend, Jack Ma will take care of you. The real Many Team.” Then Ma chimed in, “I am ready. Any time, any place, Manny’s Team is ready.”

Ma should really rethink this whole getting in the ring with a legendary boxer who has an unblemished 50-0 record, he’s going to end up needing a ventilator to breathe if he fights Mayweather.

Mayweather fought in an exhibition last December against Japanese kickboxer Tenshin Nasukawa. Mayweather, who earned $9 million for the three-round exhibition, knocked Nasukawa down three times in the bout before the kickboxer’s team threw in the towel.

Pacquiao appears to be tugging at Mayweather’s boxing shorts in an effort to get another boxing match with a gargantuan payday. Mayweather and Pacquiao first fought in 2015, that fight had a monstrous purse of $300 million, and Floyd was reportedly paid $180 million.

TMZ caught up with Mayweather on Monday night and asked about the video with Manny and Ma.

“I know what Manny said, he said when he finally faced me, I beat him,” Mayweather joked. That doesn’t bode well for boxing fans who were hoping for Mayweather-Pacquiao 2, the rematch.