Floyd Mayweather Backs Out Of Fight With Japanese Kickboxer Tenshin Nasukawa, Says He Was Misled By Organizers Of Event 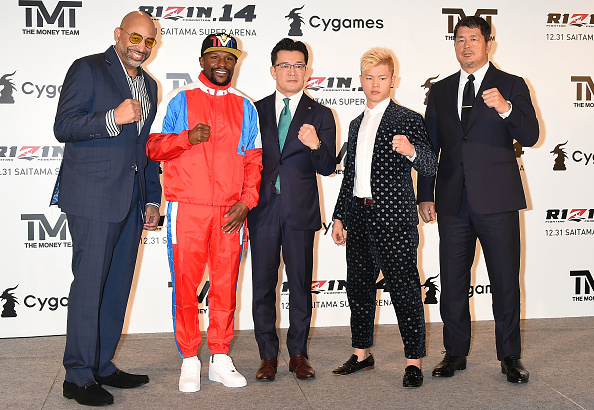 Earlier this week Japanese MMA organization Rizin made shockwaves in the combat sports world when they announced that Floyd Mayweather was going to take part in an exhibition fight against undefeated Japanese Kickboxer Tenshin Nasukawa.

Yes, this is happening. pic.twitter.com/n4OHW7oD9l

Now just a few days after the annoncement, Mayweather has called off the fight and claims it was supposed to be a private exhibition “for a small group of wealthy spectators for a very large fee.”

Now that I am back on U.S. soil after a long and disappointing trip to Tokyo, I now have the time to address you, my fans and the media in regard to the upcoming event on December 31st that was recently announced. First and foremost, I want it to be clear that I, Floyd Mayweather, never agreed to an official bout with Tenshin Nasukawa. In fact (with all due respect) I have never heard of him until this recent trip to Japan. Ultimately, I was asked to participate in a 9 minute exhibition of 3 rounds with an opponent selected by the “Rizen Fighting Federation”. What I was originally informed of by Brent Johnson of “One Entertainment” was that this was to be an exhibition put on for a small group of wealthy spectators for a very large fee. This exhibition was previously arranged as a “Special Bout” purely for entertainment purposes with no intentions of being represented as an official fight card nor televised worldwide. Once I arrived to the press conference, my team and I were completely derailed by the new direction this event was going and we should have put a stop to it immediately. I want to sincerely apologize to my fans for the very misleading information that was announced during this press conference and I can assure you that I too was completely blindsided by the arrangements that were being made without my consent nor approval. For the sake of the several fans and attendees that flew in from all parts of the world to attend this past press conference, I was hesitant to create a huge disturbance by combating what was being said and for that I am truly sorry. I am a retired boxer that earns an unprecedented amount of money, globally, for appearances, speaking engagements and occasional small exhibitions.

It is worth noting that during the press conference last week Mayweather gushed about fighting in front of a live audience in Japan.

“This particular bout is a special bout as far as we’re giving the people something they’ve never seen before. The world has never seen Mayweather compete live in Tokyo. Throughout the years, I’ve seen a lot of fans from Japan come to Las Vegas and come to the U.S., but me and my team said let’s do something different. Let’s go over to Japan.

Me trying to process Floyd Mayweather's Instagram post where he says that a fight against Tenshin Nasukawa for RIZIN on NYE isn't in fact happening at all. pic.twitter.com/ItF8dU2Rhy