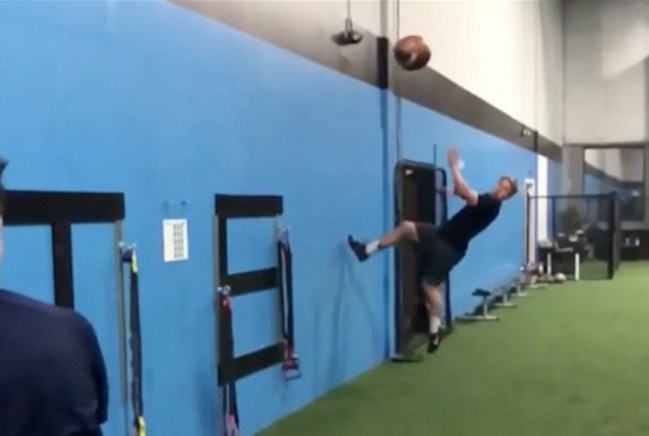 Trick shots in the NFL? I’m all for it. And if not in the NFL then maybe they bring them into play in that Vince McMahon XFL revival that’s been in the works.

Shane Moody is a certified personal trainer, former D1 University of Montana alumni, and an Elite Speed Sports Performance Coach. And he just went viral thanks to this clip of an up-the-wall backflip catch on his Instagram:

I propose that if a player’s able to pull off a backflip while making a catch they’re awarded 1-point on the scoreboard. Putting their body in harm’s way like that deserves some sort of reward other than making the SportsCenter Top 10. I mean, who the hell even watches SportsCenter anymore? It’s not like making the Top 10 is a reward in and of itself.

A few days ago, I was on here writing about how former NFL running back Reggie Bush just won $12.45 million from the Rams after he slipped on a concrete track surrounding the field and torn his meniscus and now I’m here advocating for trick shots in the NFL. I feel like a bit of a hypocrite but I’ll just choose to not dwell on that and go about living my life.