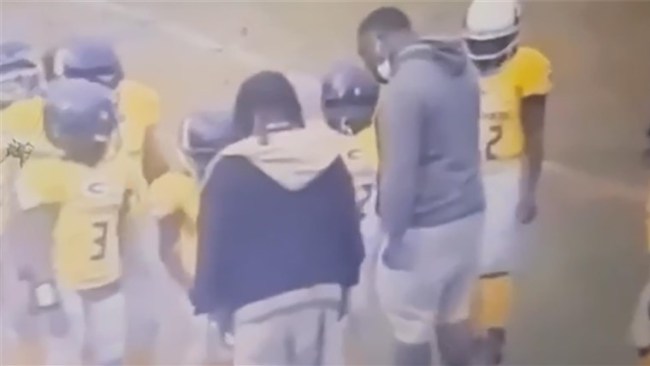 A Georgia youth football coach is facing criminal charges after a video surfaced online this week of him hitting one of his players. The Osceola County Sheriff’s Office said that the coach, identified as Gerrell Williams, will be charged with child abuse stemming from the Dec. 7 incident. Good.

Someone shared this with me. It was on their Facebook page. Supposedly happened in Florida during some championships during the past week. Anyone know disposition? Should’ve been arrested . . . . . Absolutely, totally uncalled for. We have to rid sports of “coaches” like this. pic.twitter.com/X57VMr7Rfe

A clip of the football coach winding up, cocking back and finishing with a sweeping punch to the head of one of his NINE-YEAR-OLDS surfaced earlier this week. He turns to the sideline and yells something that is inaudible before returning to the huddle and hitting the same child again, knocking him to the ground. When the player gets back to his feet, Williams yells in his face before pushing off of the field.

The commentary has it right… WHAT THE HELL?!

Williams went live on Facebook after the video went viral and delivered the worst apology of all time. He shows no remorse and says in a roundabout way that he is not sorry that the violent disciplinary move occurred, but rather that it was in a public setting. What a shitty dude.

The “apology” also mentioned that the player and the parent forgave him. They did and chose not to pursue charges. That is all fine and dandy, but Williams still punched a child at full strength and the police department recognized the severity.

“The Osceola County Sheriff’s Office, along with our local state attorney’s office, has reviewed this case and the decision has been made that charges for child abuse will be filed, regardless of parent’s decision not to press charges,” a statement said.

Deputies were notified about a case of possible child abuse on Tuesday afternoon by someone who said that they had a video of the coach striking his player. After seeing the video, investigators reached out to American Youth Football league officials who were able to identify Williams as the coach and said that he has been expelled from the league.

Off the field, the disgraced coach was previously employed as a detention center counselor in Chatham County, Georgia but is now out of a job.

Can you imagine this CHILD ABUSER as a counselor?! There is no way he is fit to help anyone with any problems. He will have plenty of time to think about his own problems if he is sentenced to any prison time, but former NFL linebacker Shawne Merriman offered his own alternative to getting Williams straightened out.

I need two minutes with this tough guy. https://t.co/qiz1zaxrlv

Williams seems to be getting what he deserves, but stepping onto the gridiron across from Merriman might be as close to a “taste of his own medicine” as it gets.