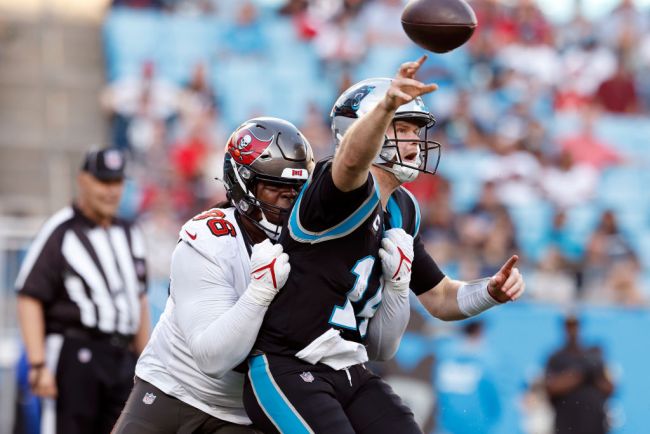 Sam Darnold’s NFL career hasn’t exactly gone according to plan. When the New York Jets spent the 3rd overall pick in the 2018 NFL Draft on him, they were expecting him to turn their franchise around. Instead, the franchise seemingly ruined him.

There were moments during his time with the Jets where Darnold flashed his potential. Unfortunately, Darnold was never able to overcome the Jets’ inability to protect him and a lack of receiving options.

After 3 years, the Jets were ready to move on from Darnold and used last year’s 2nd overall pick to replace him with Zach Wilson after trading Darnold to the Panthers. The change in scenery hasn’t done much to help his career.

Darnold struggled yet again last season and now the Panthers have already seemingly drafted his replacement. As much as that appears like it signals the impending end of his time as an NFL starter, he still believes his best is yet to come. According to ESPN’s David Newton, Darnold still believes he can be one of the best quarterbacks in the NFL.

Sam Darnold says he's "confident I can be one of the best quarterbacks in the league.'' Improving footwork is something he has to improve. “There were times last year when my feet got very … just loose is a good term . . . chaotic.’’

It’s a pretty far-fetched belief for Darnold to hold as he heads into his 5th year in the league never having thrown for more than 3024 yards in a season and having thrown more interceptions than touchdowns in each of his last two seasons.

It seems the football world does not share in Darnold’s confidence and has instead been clowning him in response to this comment.

It would not be the month of the May if we didn't hear the annual " I need to improve my footwork" from Sam..

“ Best Quarterbacks in the league “ pic.twitter.com/t5lszCExcq