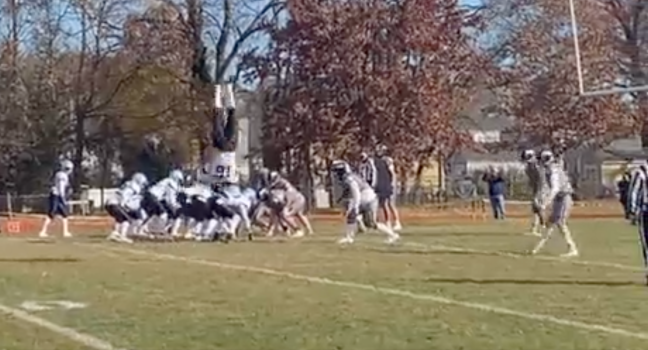 On the goal-line play, Acciardo goes into motion before the snap. However, instead of just running across the field as he normally would, he busts into multiple handsprings.

While Acciardo causes a distraction, Johnston quarterback Hunter Remington is able to take the snap up the middle for a touchdown. It’s truly unlike any play to have come before and it is wild.

I've never seen this in a high school football game…@JHSRI_Panthers WR Joe Accicardo does multiple backflips to distract the other team and it works! Panthers score the touchdown.

Acciardo is not just a crazy athletic wide receiver. He’s more than that.

Jo-Ann Acciardo, his mother, runs a dance academy in Rhode Island. Her son, Joey, trained at the academy before he ever picked up a football and has danced on stage with Justin Bieber, performed at the Macy’s Thanksgiving Day Parade, and auditioned for a TV show that is hosted by Jennifer Lopez.

His athleticism and dance background became a valuable asset for Johnston and Acciardo’s head coach, his father. Knowing that his son has an incredible tumbling ability, he installed a red-zone play with Acciardo flipping in motion.

The team ran the play earlier in the year but it was flagged by an overzealous referee. It was not flagged on Thursday and it became an important score in a 29-12 win.

By now everyone’s seen the video shot by WPRI of Johnston’s Joey Acciardo doing handsprings as he goes in motion to try and distract the Pilgrim defense.
This video, shot by his mother Jo-Ann, gives you another peak at to how crazy it actually was. pic.twitter.com/heSwqQX2Cr

As Acciardo started flipping, a Pilgrim linebacker is very clearly confused by what is happening, has no idea what is unfolding in front of him, fails in coverage, and allows the touchdown. Remarkable!