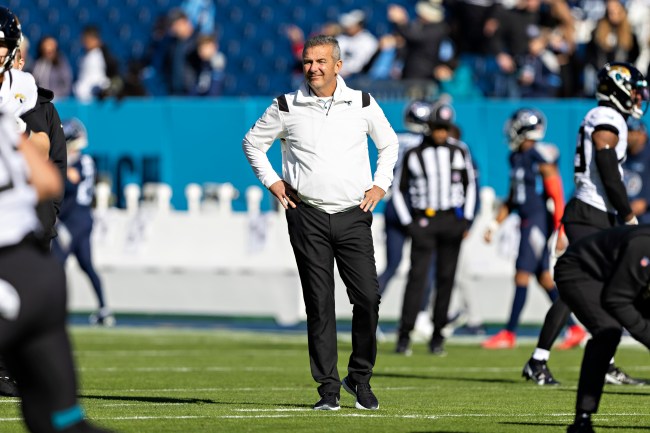 The reasons to fire Urban Meyer continue to pile up for the Jacksonville Jaguars. It seems like there is a new issue every day in Jacksonville and almost all of them can be traced back to Meyer.

Today’s issue doesn’t involve lap dances or loser coaches. Today, it’s about a former player accusing Urban Meyer of kicking him in an interview with the Tampa Bay Times.

“I’m in a lunge position. Left leg forward, right leg back,” Lambo said. “… Urban Meyer, while I’m in that stretch position, comes up to me and says, ‘Hey Dips–t, make your f–king kicks!’ And kicks me in the leg.”

Lambo further elaborated on the action and how he was feeling in the moment.

“It certainly wasn’t as hard as he could’ve done it, but it certainly wasn’t a love tap,” Lambo said. “Truthfully, I’d register it as a five (out of 10). Which in the workplace, I don’t care if it’s football or not, the boss can’t strike an employee. And for a second, I couldn’t believe it actually happened.
As if the act itself wasn’t bad enough, Meyer showed no remorse when confronted about it.”

As if the act itself wasn’t bad enough, Meyer showed no remorse when confronted about it.

Lambo accuses Meyer of kicking him!

If the Jacksonville Jaguars aren’t ready to fire Urban Meyer after this accusation then I don’t know what actually will get them to move on from this disastrous hire.