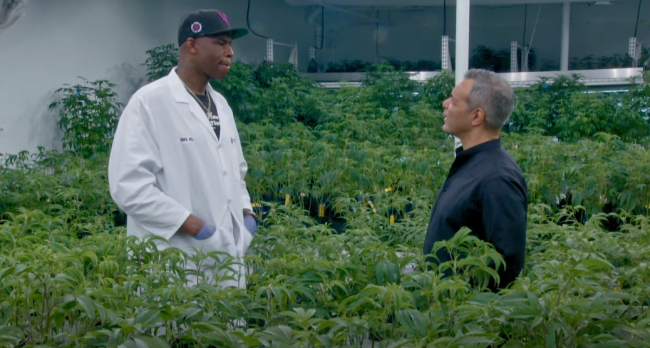 Former Indiana Pacers star Al Harrington was one of the first NBA players to get into the legal Cannabis industry 10 years ago at a time when much of the country still hadn’t decided to legalize marijuana.

Now that the floodgates have been opened and his business is thriving, Harrington plans to give back to the African American community in a big way. While being profiled s by HBO’s Real Sports alongside other NBA players turned cannabis entrepreneurs, Harrington says that his goal is to create 100 black millionaires through cannabis because one of his main goals is to diversify the industry.

“My mission is to create 100 black millionaires through cannabis…I know it’s possible. There are different layers to this onion but one of them that’s at the core of my heart is diversity in the cannabis space’.

Former NBA stars Al Harrington (@cheddahcheese7) and @Matt_Barnes22 are part of the new green gold rush of the legal cannabis industry, looking to grow their profits and help the Black community along the way. An all-new episode of #RealSports premieres Jul 27 on @HBOMax. pic.twitter.com/PW447pdqI4

As of now Harrington says he’s helped create 8 black millionaires but continues to be optimistic that he’ll get to 100.

To watch Harrington’s interview tune into HBO’s Real Sports with Bryant Gumbel on Tuesday JULY 27 at 10:00 p.m. ET/PT. The series is available on HBO and to stream on HBO Max.