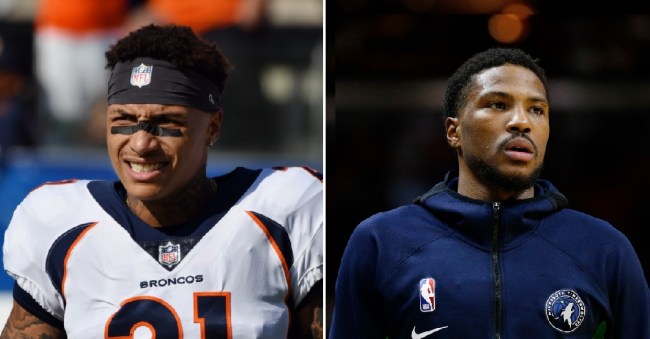 Former NFL safety Su’a Cravens has found himself in the middle of the messy Malik Beasley-Larsa Pippen drama.

Earlier this week, the married 24-year-old NBA player was caught allegedly cheating on his wife with Scottie Pippen’s ex-wife.

Beasley’s wife Montana Yao went on to immediately file for divorce after seeing her husband hanging out with Larsa Pippen.

Celebrity gossip blogger Fee with the Tea went on to imply that Yao cheated on Beasley with NFL player Su’a Cravens last year.

Not saying @larsapippen is right , but her new dude’s wife did cheat on him with an NFL player. Malik Beasley had a fight with his wife’s side dude over it☕️ pic.twitter.com/1hAJh63dbB

Su’a, who got into a fight with Beasley in an apartment lobby back in 2019, spoke to TMZ this weekend and immediately denied the rumors that he ever had an affair with Beasley’s wife.

NFL player Su’a Cravens is addressing the rumors on social media — saying when it comes to Montana Yao, “There was no cheating.”

There are rumblings Su’a’s 2019 fight with Yao’s estranged husband Malik Beasley was over cheating allegations … the insinuation that Malik went after Su’a for getting involved with his then-girlfriend.

But, Su’a tells TMZ Sports straight up that’s just not the case at all.

“There was no cheating,” Su’a says … “Montana and I hung out years prior to her and Malik even starting to date.”
As for why Su’a and Malik threw down in that apartment lobby in Colorado back in 2019 — all Su’a would say is Malik “brought that up onto himself. He got beat up for no reason.”