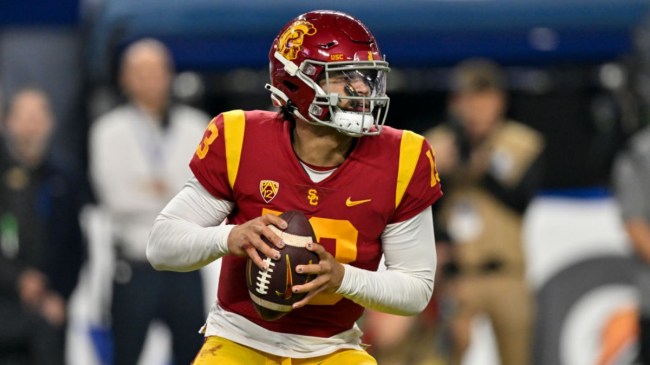 Before USC’s PAC-12 Championship Game rematch against Utah, Caleb Williams made some headlines before the game for an unexpected reason.

The star quarterback and leading Heisman candidate had painted “F*** Utah” on his fingernails ahead of the big matchup.

It was a decision that didn’t age particularly well as Utah absolutely dominated USC over the last 3 quarters of that game on the way to a 47-24 win. After the game, Utah quarterback Cameron Rising hilariously dunked on Williams when asked about the fingernails.

While it looked like that parting shot from the Utah quarterback would be the end of the fingernails story, it turns out there could be another chapter.

Today, former Georgia quarterback Aaron Murray revealed that there are Heisman voters who are reconsidering their votes because of the fingernails.

“That is some soft, holier-than-thou, B-S right there”

—@TBob53 and @aaronmurray11 debate if painting his fingernails could lose Caleb Williams the Heisman pic.twitter.com/YdkAJyR27N

I think Caleb is the best player in America. But the discussion would be over, if he didn’t put (F—) Utah on his fingernails. Because I’ve talked with some Heisman voters this week, and that’s their big hesitation.

We saw this last year with the guy who said he wouldn’t vote for Aaron Rodgers for NFL MVP because he didn’t like Rodgers. This is even more ridiculous.

Changing your vote for a performance-based award because you don’t agree with something a player did off the field. Off-field behavior also isn’t something we’ve seen change the Heisman vote in recent years. This is an award that Johnny Manziel has one of.

Caleb Williams lit it up for USC this year and helped turn the Trojans back into one of the top football teams in the country. What he does with his fingernails before games doesn’t change that.