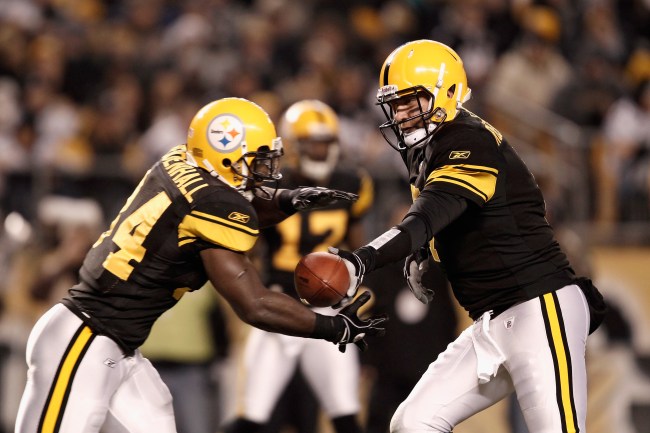 The Pittsburgh Steelers drama continues to boil over this offseason. For the past few months, former Steelers wide receiver Antonio Brown has been beefing with QB Ben Roethlisberger who he claims has an “owner’s mentality”.

Many fans have turned on Brown during his beef with Smith-Schuster but former Steelers running back Rashard Mendenhall came in to defend Brown by calling Big Ben a racist during a Twitter rant this morning.

I know he seems outta pocket right now, but I seriously feel for @AB84.

As a black athlete in this country, you can literally lay your body out and give your entire being for a higher cause, the greater good of a TEAM.

And when you face the firing-squad, for something not entirely your own doing, depending on your position and skin-tone, the “team” may very-well leave your ass out to dry.

Alright, I’ll end the mystery… B’s racist and @AB84’s black. He had to catch balls from a racist quarterback. Every honest player knows it, it’s not a big deal. He was just supposed to take his lickings and move on, like a slave for real. https://t.co/ubI39UDauY

Clearly it’s no fun, when EVERYONE’s the accused…

Please allow the dialogue in sports to be equal. Why’s it so easy to shoot at one player, but not the other?

B’s not racist. Just like AB’s not a dirtbag.#letsbefair

What were you thinking??? You’ve already cracked open a can of worms…. and now you’re fumbling through tweets like a Super Bowl fumble….

Former Steelers coming out talking about a former teammate like this then taking it back… it’s not like you need the attention I’m pretty sure you do just fine for yourself now. Pretty low on your part to say something like that on Twitter.