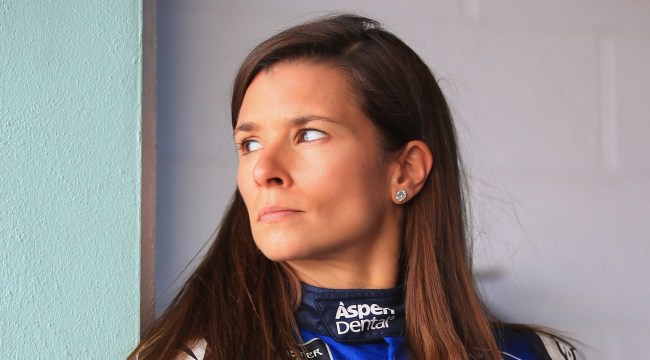 Okay, guys, are you ready for some conspiracy theories? Because when it comes to Danica Patrick dating Aaron Rodgers I’ve got ’em. Here we go!

I find it REMARKABLY coincidental that a couple of days before Danica Patrick is set to announce her new sponsorship with GoDaddy for her final two races, the Daytona 500 and Indy 500, AKA the “Danica Double” as they’re calling it (barf), she also announces that she and Aaron Rodgers are dating.

Throw in the fact that Patrick has been out promoting a book, announced that she has a new website coming out, and suddenly she’s getting all sorts of publicity… for dating Aaron Rodgers (who has had zero comment on the subject thus far).

Appearing on The Joe Rogan Experience earlier this week, Patrick, 35, also revealed that a couple of years ago she had her eggs frozen because we need to know that and, as she put it, “I’m getting older and I drive race cars.”

Anyway, back to the reason you came here: Danica’s hilariously uncomfortable appearance on the Fox Business Network Thursday morning.

Patrick was on the show to talk about everything I just mentioned, racing, GoDaddy, her book, etc. when in the final moments of the segment Cheryl Casone went for it, saying, “Really quick, Danica, I gotta ask you, you made it public now that you’re dating the quarterback, Aaron Rodgers. I mean, that was a big decision for you, personal decision for you. Obviously now you’ve got the clothing line, the fitness book, so much more to come, what can we expect next from you and are you going to do anything with Aaron?”

Patrick’s answer? “Uhh, I don’t know, umm, you know I’d love to having a cooking show…”

Casone is lucky Patrick didn’t drive to the studio after the interview and drop her. At least according to this woman who says she worked with Danica for five years…

Skip to around the 2:44 mark of Patrick’s interview on Fox Business below if all you want to see is the awkwardness.