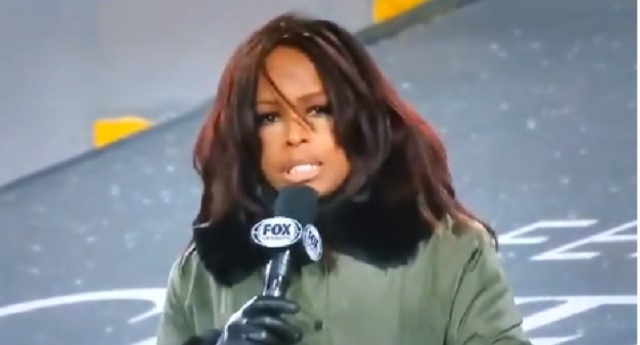 NFL fans weren’t entirely sure what to make of FOX Sports sideline reporter Pam Oliver’s appearance during the Packers-Rams game in Green Bay on Saturday night.

After halftime, Oliver appeared to slur her words while giving her report on Packers head coach Matt LaFleur.

Praying all is well with Pam Oliver. Something is not right. #PamOliver pic.twitter.com/PA8fRyBctX

Fans were pretty worried about Oliver’s health on Saturday.

Is Pam Oliver okay? Was slurring her words hard there.

What is going on with Pam Oliver? This is the second time I’ve heard her slurring. It doesn’t sound good at all.

Glad to see after searching Twitter that I'm not the only one worried about Pam Oliver. Is she having a stroke? Serious question

Some are convinced that Oliver is slurring her words because she’s cold.

Seeing some stuff about Pam Oliver’s hit from the sideline…

If you’ve ever reported from Lambeau or Soldier Field in January, you know it’s so dang cold you can barely speak (especially if you’re standing out there all night)

lmao yall Pam Oliver's face is fully frozen and she still managed to get out her report. What a trooper!!!!!