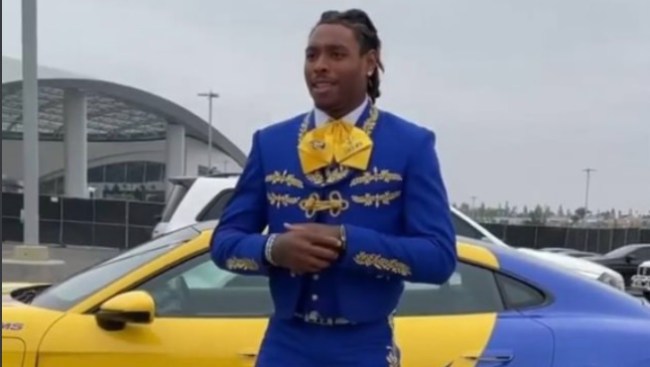 Fox Sports found themselves in a bit of hot water on Sunday afternoon for mocking Jalen Ramsey‘s outfit.

Before the Rams game against the Bucs, Ramsey showed up to the stadium dressed as a member of a mariachi band to honor Hispanic heritage month.

Jalen Ramsey has been a big fan of the Rams mariachi band since he saw them play at one of his first games in LA at the Coliseum. Today, he channels their energy and look! https://t.co/rpC2ZNRtCP

Fans were quick to point out that Django was a slave in the movie and Fox immediately decided to delete the post.

Jalen is in a mariachi outfit. This tweet is so bad.

Django is a character. You mean Jamie Fox. The fact that they're both Black men wearing blue outfits with cravats is all these photos have in common. We don't all ACTUALLY look alike. I know you thought this was the height of cool, but mostly you guys just seem kind of racist.

And I’m upset about it.

Django was a film about slavery and the mere comparison upsets me. https://t.co/K7gHDXTAPx pic.twitter.com/z78p1mK42j

Jalen Ramsey was clearly dressed like matador and they compared him to Django????? pic.twitter.com/zlzsRyXXh7