Francis Ngannou Continues His Big Week With A KO Prediction 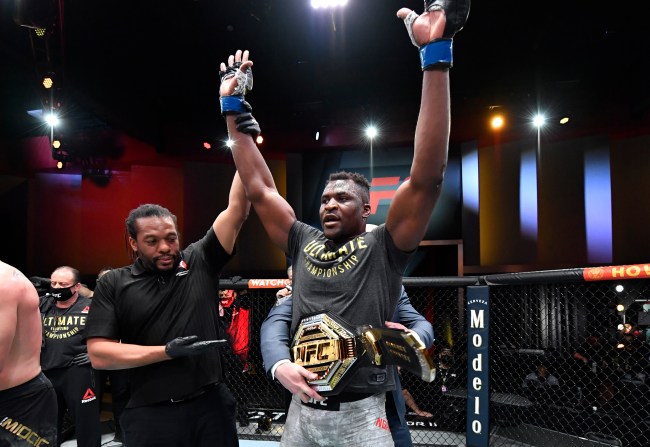 We haven’t seen Francis Ngannou in the Octagon since March and he won’t step back in until next weekend, but that hasn’t stopped him from dominating the headlines in the MMA world his week.

For most of the week, the conversation has been about Ngannou’s future with the UFC. Today, he discussed his upcoming fight with Cyril Gane. While talking to TMZ, Ngannou gave his prediction for next Saturday’s heavyweight title unification.

“The knockout doesn’t come when I search it, so I won’t be searching for the knockout, but I don’t see how we will end this fight without me knocking him out, maybe under 2 rounds.”

It’s definitely a prediction that makes sense for Francis Ngannou. His career record and the matchup would indicate that he’ll need to finish this fight early if he’s going to hold onto his belt. Ngannou has never won a fight that entered the 3rd round in his entire MMA career.

Ngannou’s big edge here is his knockout power while Gane is more skilled and has better cardio. If Ngannou does get an early KO win in this fight, then things will get really interesting.

Ngannou has been engaged in a drawn out negotiation for a contract extension with the UFC. This fight is the last one left on his contract and he said today that he won’t keep fighting for the UFC without a raise and an option in his contract to box.

Whoever takes home the belt next Sunday will be expected to have a long reign at the top of the heavyweight division. A highlight reel KO here would be a big help to Ngannou’s negotiations.