Frank Gore Is Ready To ‘Party With His Boys’ After Setting Record, Scoring 100th Touchdown In Jets’ First Win Of 2020 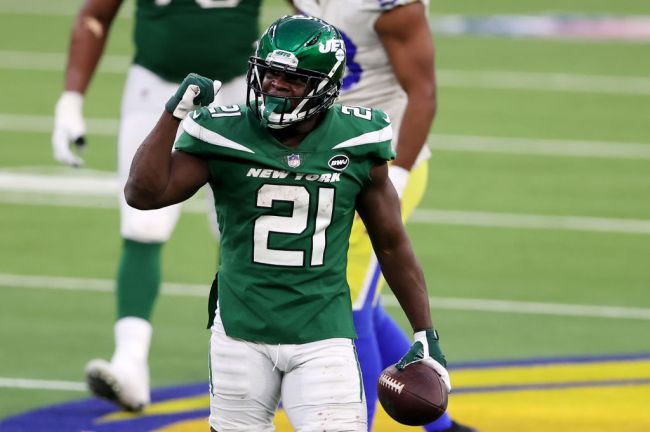 The New York Jets are 1-13 after an upset win over the Rams, but the real record of note came at running back. 37-year-old running back Frank Gore was drafted in the fifth round of the 2005 NFL Draft by the San Francisco 49ers and is playing on his fifth team in 15 years. He signed with New York for the 2020 season and was instantly thrust into a prominent role in the backfield after Le’Veon Bell was released.

By taking a snap on Sunday, Gore has now played in 240 career games and etched his name into the record books. He now owns the record for most career games played by a running back in NFL history. The former Miami Hurricane passed Lorenzo Neal, who played 239 games in 16 years at fullback.

To ice the cake on the record, the Jets won their first game this season. Gore spoke to Taylor Bisciotti with the wisdom that only a veteran of his caliber can. He addressed the franchise’s tank and how proud of his younger teammates he was for the win, and then said he was ready to go party with them.

My interview @nflnetwork with @frankgore @nyjets after their first win in 358 days. pic.twitter.com/VpYbO9mrZh

In his fifteen-year career, Gore has carried the ball 3,721 times for 15,952 yards and 19 touchdowns. He is 757 yards from reaching Walter Payton a moving into the No. 2 spot on the NFL’s all-time rushing list. Gore is also amidst his NFL record 16th-straight season with more than 500 rushing yards and an NFL record 16th-straight season with 125 rushing attempts. His workload has slowed down some, but not much. To put it in perspective, he became the ninth player in NFL history to record 3,000 career attempts in 2017.

Not only did he get the record start in a win, but he found pay dirt in the third quarter! It was his 100th career touchdown and his 81st career rushing touchdown, which ties Ottis Anderson for the 19th most rushing touchdowns in NFL history.

Gore hasn’t given any indication as to when his retirement may come, but there would be plenty of NFL franchises that would love to keep the veteran back around. Especially if he continues to produce like he is. Gore’s son Frank Jr. was born in 2002 and is a freshman at Southern Miss. While unlikely, if his father can keep the wheels turning for three more years, they would be the first-ever father-son NFL running back duo. We can dream.