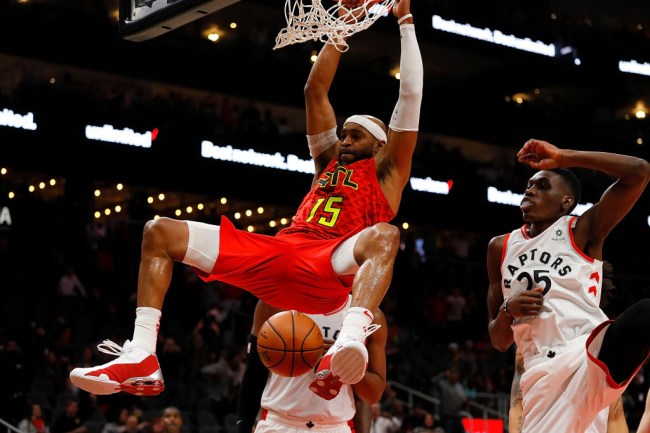 In 2007, Dwight Howard competed in the first of what would ultimately become eight straight All-Star games and opted to take advantage of one of the other festivities offered during the weekend when he tried his luck at the Slam Dunk Contest.

Despite showcasing a vertical that would make him capable of dunking on a rim 12-and-a-half feet above the ground,  he was unable to outdo Gerald Green but returned with a vengeance the following year and closed out the competition by donning a Superman outfit and delivering an emphatic throwdown in a single bound to take home the title.

He was unable to defend his crown the following year and it appeared we had seen the last of him until he shockingly announced he’ll be rocking the rim with all of his might at the ripe age of 35 at this year’s contest.

After the news broke, there seemed to be a common sentiment among fans who wanted the NBA to double down and fully embrace the throwback theme by paying homage to the man who set a standard that may never be matched by extending an invite to Vince Carter.

Vinsanity’s performance at the first dunk contest of the new millennium is the stuff of legend and served as a much-needed shot in the arm to a tradition that has lost its luster over the course of the 1990s.

However, as impressive as those jams were, he somehow managed to put them to shame later that year in an actual game with the posterizer to end all posterizers.

Carter headed to Sydney in 2000 as a member of Team USA, which faced off against France in the final game of the qualifying round. The American squad was sporting a 15-point lead when France’s 7’2″ center Frederic Weis saw himself serving as the only obstacle between a driving Vince Carter and the rim.

Weis put himself in a position to take a charge and Carter had to figure out a way to avoid getting called for one before deciding the best option was to simply jump over the defender to slam home what  was ultimately dubbed “The Dunk of Death.”

The Frenchman has gone on record as saying he’s glad he was able to contribute to such a historical moment. He has a great deal of respect for Carter, and as a result, he’s now urging the NBA to give him the respect he truly deserves.

Hey @NBA , why don't you invite Vince Carter and me at the dunk contest for the remake of 2000 olympics !

Trae Young is also doing what he can to get the 42-year-old veteran a well-earned curtain call.

Vince Carter To The NBA Dunk Contest…. NEEEED IT!! #ThatsMyVote

As of right now, there’s no telling if Carter even has any interest in participating but I’m going to hold out hope that all the stars that need to align to make this happen can eventually get into positon.