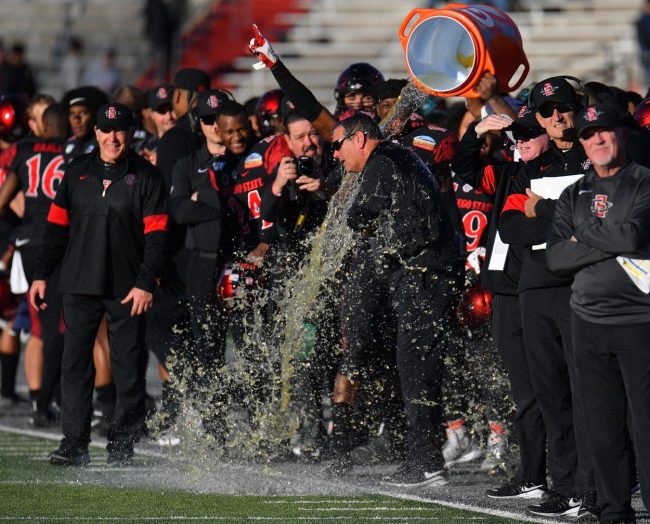 Tuesday, December 21st, 2021 was the the 21st day of the 21st year of the 21st century. It was also a great day for celebratory college football bowl game baths.

The day began with the Famous Idaho Potato Bowl. Wyoming, behind 200 rushing yards from its 6-foot-5, 225-pound quarterback, won the game. Afterward, head coach Craig Bohl had a Five Guys order amount of fries dumped on his head.

Not but four hours later, the Tropical Smoothie Cafe Frisco Bowl (easy for you to say) took place in Frisco, Texas. It featured two teams with the third-best combined regular season record, behind only the College Football Playoff.

Only one team, however, had the joy of bathing their coach in a smoothie.

As the game came to a close, SDSU head coach Brady Hoke stood oblivious on the sideline. When the clock got under a minute, two of his players snuck up behind him and dumped a cooler atop his head.

The announcer said it was a Gatorade bath, but the liquid looked and acted differently upon being dumped. It looked pineapple or mango-based.

After taking a moment to realize what hit him, Hoke appeared to turn to his players and ask what was in the cooler.

They emphatically replied something along the lines of a “A SMOOTHIE!”

“A SMOOTHIE!” the two Aztecs appeared to answer, as if to say “it’s the smoothie bowl, duh!”

College football bowl season is the best. If you want less bowls, you are wrong.