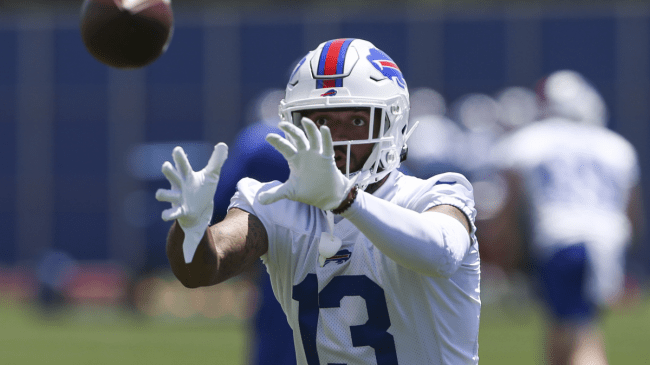 Gabe Davis showed up to the season opener in style, rocking a pair of custom cleats for the Bills’ matchup with the Super Bowl champion Rams. Those shoes donned an image of characters from the popular show Peaky Blinders.

Davis is fresh off a 500-yard season where he hauled in 35 passes in the Buffalo offense. He’s hoping to improve upon those numbers in Year 3 as he teams up with quarterback Josh Allen. The Bills enter the season as the Super Bowl favorites at most sportsbooks, so the pressure is on to succeed.

They’ll have to get past last year’s champs in Los Angeles to start the year off on the right foot. Davis is hoping the cleats will bring some attitude to his play on Thursday night.

The shoes boast three characters from the shoe. Those are Tommy Shelby, Alfie Simmons, and Arthur Shelby. The drama revolves around a gang in Britain, aptly named the Peaky Blinders, that takes place after the close of World War I.

Upon seeing the custom cleats, fantasy experts are predicting a breakout performance.

Many around the NFL are expecting a big game from Davis after seeing those kicks. Take a look at what fans and media had to say about the wideout on Thursday.

His updated projection for the game is 9 catches, 221 yards and 6 TD. pic.twitter.com/qY36aUX9wX

Whatever Gabe Davis’ O/U touchdown total is for tonight, it’s too low https://t.co/Mff7T9CSKz

This fan posted, “Gabe Davis wearing Peaky Blinders cleats the day the queen died? Yea go ahead add on Over 59.5 And double down on Anytime touchdown.”

Yea go ahead add on
Over 59.5
And double down on Anytime touchdown. pic.twitter.com/xGuIk67UUh

We’ll see if his performance lives up to the new expectations. One thing is for sure, the Gabe Davis’s cleats have taken the internet by storm.