Gabe Kapler’s Cruel And Unusual Eating Habits Are How He Stays Looking Like A Real-Life G.I. Joe 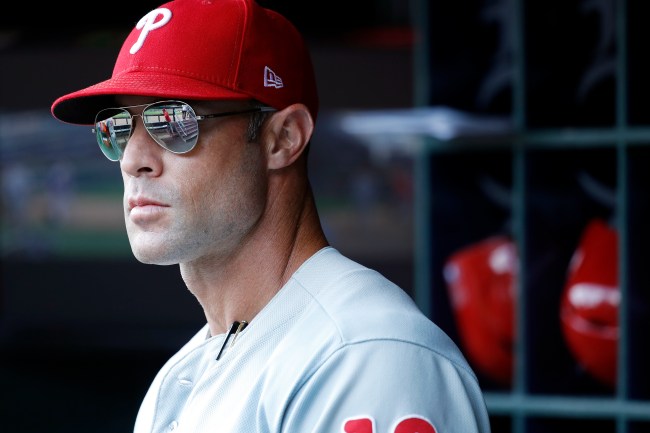 If you’re just waking from your 20 year nap under a rock and are seeing a photo of Gabe Kapler for the very first time, there’s no way you can reasonably assume that he didn’t exit the womb with veins popping out of his forearms and a jawline that makes G.I. Joe’s look like Bartolo Colon’s.

Kapler is essentially a walking army recruitment ad. His face is the very thing our foreign enemies hate. Look at the picture above. Is Gabe in a baseball dugout or a Top Gun cockpit? You don’t need a helmet if you’re not going to crash.

But what if I told you that Gabe Kapler–the dude above who has muscles in his earlobes, played 12 seasons in the MLB, and was just named the manager of the San Francisco Giants–was a lazy slob who got his baseball scholarship revoked at Cal State Fullerton before the end of his first semester.

A profile by Ryan Gorcey of Mercury News details the immaturity of an 18-year-old Gabe Kapler.

During his lone semester in Fullerton, Kapler spent most evenings driving more than an hour one way to see his first serious girlfriend, Lisa. He spent most other nights partying. The late hours he kept led to weeks of blown-off classes and missed morning workouts.

As Kapler — now a noted health freak — wrote on his personal blog in 2014, “My go-to meal was a Double Del Cheeseburger (from Del Taco), those special wrinkly fries and a big ol’ Coke with a lot of ice. … I quickly developed an affinity for beer, malt liquor in particular.”

After getting his scholarship yanked, Kapler chose to attend a California community college called Moorpark, where he cut out all the bullshit and showed up correct–being described as a “specimen” by a former teammate and living the ‘first one in, last one out’ mantra.

If you’re wondering how and undisciplined kid turned it around so quickly, this story that outs Gabe Kapler as a sociopath may clear things up for you.

Kapler credits a Moorpark nutrition class for teaching him the importance of eating right. When his team stopped at McDonald’s on the way back from a game at Cuesta College in San Luis Obispo, Kapler, having forgotten to pack his usual tuna-on-rye sandwich, peeled the skin off of all 40 of his Chicken McNuggets.

“I’m going, ‘Dude, that dude is real,’” said Briggs, who was in the same car. “He puts his money where his mouth is.”

Aside from how long and tedious it would be to peel the skin off three dozen nuggets, seeing a skinless chicken nugget is basically like seeing your buddy’s dad naked in the guy locker room. It’s that jarring. Just all white and unfuckable and slippery for some reason. No thanks, I’ll have a Big Mac, a large fry and an Oreo McFlurry like someone who doesn’t have human body parts in his freezer.

Hold on. It gets worse. It was recently brought to my attention that Kapler’s other eating habits are even more concerning.

After the Philadelphia Phillies hired him to be their manager in October 2018, Phillies beat writer Matt Gelb tortured us with this information:

“He was so into health,” [Greenville catcher Jon] Still said. “He’s addicted to ice cream. So he would sit there and lick ice cream but have a cup and spit it into it. He would lick it just for the taste but didn’t want to eat it. I told him, ‘Dude, that’s like Unabomber type stuff.’ That’s a thing he did.”

PSA to Bay Area Residents: Hide yo kids, hide yo wives. Gabe Kapler is about to chew them up and spit them out.