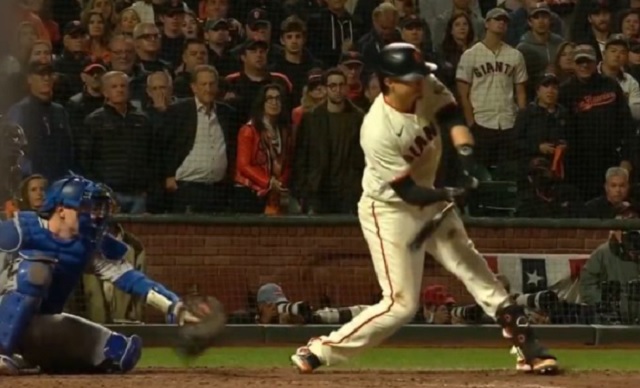 Game 5 of the NLDS between the Giants and the Dodgers ended in controversial fashion and fans aren’t happy.

In the bottom of the ninth, down one run with a man on first, two outs, and two strikes, umpire Gabe Morales eliminated the Giants from the playoffs with a blown checked swing call to Wilmer Flores.

That's not a swing. 😑 pic.twitter.com/xI5b4KUT1N

Fans were absolutely livid at the blown call that ended the Giants magical season.

Gabe Morales should be ashamed of himself making a call like that to end the NLDS.. that is trash. Nowhere near a swing.. Wilmer Flores was robbed there. Unbelievable. That’s sickening. Shouldn’t be there if he can’t handle the moment

You cannot end the Giants’ 107-win season on a check swing that wasn’t a swing. Holy fucking shit. pic.twitter.com/SmkkOgEp0H

Gabe Morales is now famous for the wrong reason… pic.twitter.com/4FFPW0juwh

An umpire ending someone’s season on an incorrect check swing call is how I become the Joker.

You have got to be shitting me, Gabe Morales. Or – in this case – yourself.