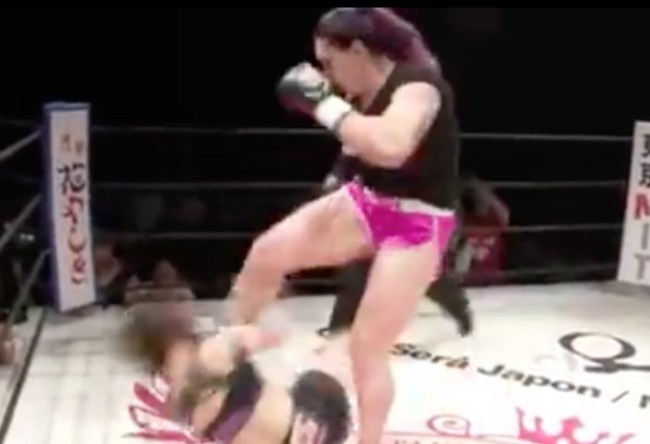 Gabi Garcia is going to kill someone. Not purposefully. But kind of purposefully. The 6’2” 209 lb. Brazilian jiujitsu world champion turned MMA fighter, made her MMA debut against 45-year-old bantamweight Megumi Yabushita at S-Cup 2017 inside Tokyo Dome City Hall in Tokyo, Japan, and things ended poorly for Yabushita.

The 31-year-old Garcia, who towers over the 5’2” bantamweight and has 75 pounds on her, dropped her opponent within the first two minutes if the match and added insult to injury by delivering a fight-ending soccer kick to the upper body of Yabushita.

The referee declared the bout a no-contest (not a disqualification) after giving Gabi a red card for her second infraction of the night. Her opponent exited the ring with her arm in a sling. The rules of shoot boxing only permits punches, knees, elbows, throws and submissions from a standing position, Yahoo reports.

Gabi Garcia fight was a no contest due to illegal soccer kick pic.twitter.com/JEWo6vKU13

This isn’t the first time Gabi’s broken the rules. Back in 2014, the nine-time International Brazilian Jiu-Jitsu Federation Champion was stripped of her medals from the previous year after testing positive for Clomiphene, a drug that blocks estrogen’s effects and restores testosterone levels to normal, typically used by females to aid infertility. Garcia still remains a member of the IBJJF Hall of Fame. Seems natural…

Here's Gabi Garcia next to Wanderlei Silva…. Wandy probably weighs about 200 in this photo. Ick. pic.twitter.com/zNIys0oOiK

I mean, should we really be surprised by this? Who let this fight happen?

Garcia’s next fight should be a little more evenly matched, as she is set to take on Oksana Gogloeva, a Russian who is 5’11” and 220 pounds, at Rizin FF 6 on July 29. Probably not though.

Check out the entire fight below. It’s like watching a car crash. Pretty damn entertaining.