Gardner Minshew Was Playing Cornhole When The Jaguars Drafted Him 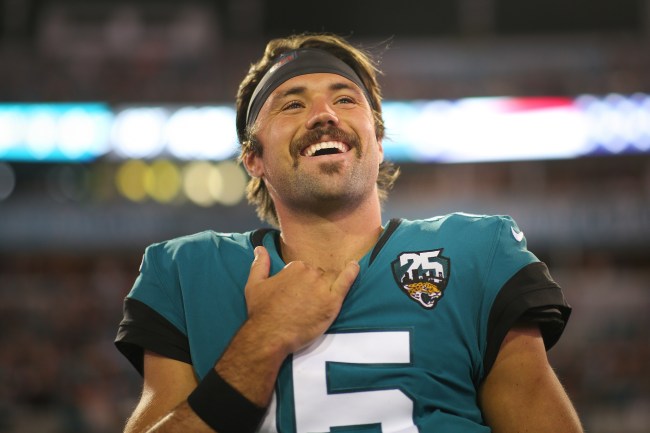 The legend of Gardner Minshew continues to grow.

Earlier this season we learned that Minshew stretches before games while wearing nothing but a jockstrap.

Per @MikeGarafolo, #Jaguars starting QB Gardner Minshew III stretches in the pre-game locker room in nothing but a jockstrap. Again, our hero 🇺🇸🇺🇸🇺🇸

Jags source to me the other day: “Who even wears jockstraps, let alone stretch in just that? It’s awesome.” Point is they love the guy and the fact he’s his own person and doesn’t get flustered. That’s part of why they think they’ll be OK with him. https://t.co/bEUzVqAcCM

He was even dubbed the “Jockstrap King” by teammate Leonard Fournette

Leonard Fournette with two gems about QB Gardner Minshew: "His name is Jock Strap King" and "He's stronger than you think. I don't know if the mustache gives him power or what." https://t.co/pNPkr3BCrZ

Now we’re learning that Minshew was broing out and playing cornhole when he learned that he was drafted by the Jacksonville Jaguars.

Back in 2018, Minshew joined “XL Primetime” to talk about his draft experience and it didn’t disappoint.

It was an awesome feeling,” Minshew told 1010XL when asked about hearing the Jags were selecting him. “Honestly, I was trying to keep my mind off of the draft and not let it drive me crazy. I was playing a little cornhole with some of my buddies and my sister brought me the phone and I saw it was a Jacksonville number and I was fired up. It was a feeling like no other.”

Minshew was asked what interaction with the Jaguars he had in the pre-draft process.

I had a formal meeting with them at the combine and I felt really good about it,” Minshew said. “It’s one of those things where you forget because you talk to other people more recently, but I felt really good coming out of that meeting, it had just been a while since I had really talked to them in depth, but I guess it was enough to make them want to pull the trigger.”

“As far as studying the game, knowing the game plan, being the most prepared, the hardest working, being the best leader I can be, all those are things I can control and I can provide for a team.”

God, Minshew is such a fucking Bro.

Hey, if you're going to be king of something, it might as well be a jock strap. https://t.co/MswBdu69h9