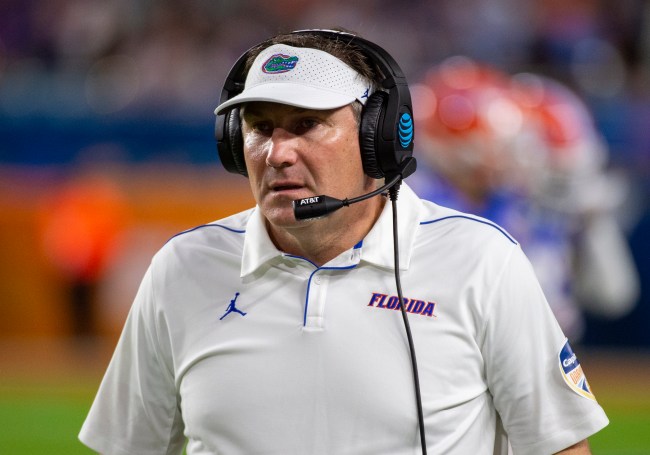 Florida Gators coach Dan Mullen is receiving plenty of criticism over his role in the team’s brawl against Missouri.

On Saturday night, players on both teams were involved in a wild brawl before halftime following a late hit by Trajan Jeffcoat on UF QB Kyle Trask that was not called a penalty on the field by refs.

For those who don't have SEC Network Alternate … the end of Half between #Mizzou and Florida. Trajan Jeffcoat with a late hit is what Florida got upset about. pic.twitter.com/jOTxFPzbuD

In this angle of the incident, you can see Mullen going crazy on the field before the brawl took place.

Here is the fracas with Florida and Missouri at the end of the first half pic.twitter.com/EBIokPAxsI

So Dan Mullen essentially started that brawl (his players were walking off the field when he ran out there) during a pandemic, then got a talking-to from the refs and came BACK onto the field to rile up the crowd? The SEC ought to levy the biggest fine it's got.

Having now watched the entire sequence starting with the hit on Trask — the whole melee started with Mullen running on to the field like a mad man to confront the refs.

And then he egged on the crowd like a wrestler on his way out.

He's had an interesting few weeks.

After the fight on the field, Mullen was seen hyping the crowd before heading to the locker room.

SEC Network says Dan Mullen told them he was trying to get his team off the field. He went after a ref on the field, according to the tape. And then he did this after the field was cleared. pic.twitter.com/PPw1t8kJZy

Mullen should probably expect a huge fine for the way he handled himself on Saturday night.