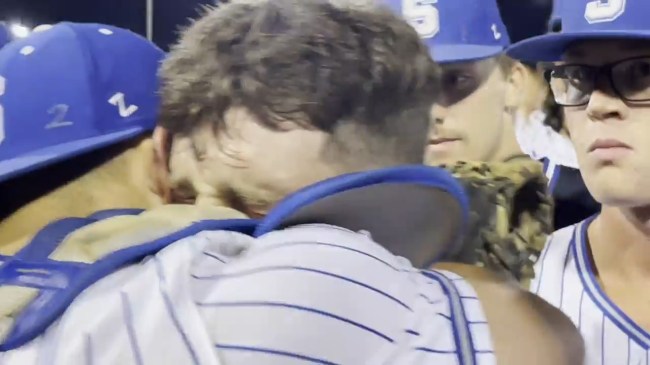 Less than 72 hours after the sudden, heartbreaking loss of his father, Gehrig Conard threw a complete game shutout in the playoffs. It was a night that could not have been written any better.

Kevin Conard was a proud employee of the Stone County School District, located in south Mississippi, for decades. He was a teacher first, then a baseball coach, then an assistant principal at the high school, then the district’s director of nutrition before accepting his dream job as the athletic director. Kevin passed away suddenly while cutting his grass on Wednesday night at only 44 years old.

Two days later, his son Gehrig took the mound for Stone High in the third round of the Mississippi Class 4A playoff. That’s exactly where his dad would have wanted him to be. More than 1,000 tickets were sold and Conard was embraced by his senior catcher after the National Anthem.

Still at loss of words from last night. NOT DONE YET!!!!!! #forconard💍❤️ pic.twitter.com/3ZmDXH47he

The entire evening drew significant similarities to Brett Favre’s Monday Night football game in 2003. Favre played one of the best games of his life on the day after his father passed. He threw for 399 yards and four touchdowns in a win over the Raiders.

December 22, 2003: A day after his father passed away, @BrettFavre throws for 399 yards and 4 touchdowns in Monday Night Football in a win over the Raiders. pic.twitter.com/q1nPG0vmsv

As fate would have it, Favre has significant ties to south Mississippi. He sent a text to Gehrig before the game and gave him words of encouragement.

Much like his Magnolia State counterpart, Gehrig Conard played his heart out. Not only did he throw a complete-game two-hitter, but he finished the night with 10 strikeouts. In addition, he helped himself at the dish and went 3-for-4.

Stone High went on to win 5-0 in game 1. This video really sums up the night. Needing just one out to take Game 1, Conard worked a two-strike count and his teammates came out to console him on the mound. His next pitch registered 91 miles per hour on the radar. It was his best velocity of the season.

One of the coolest scenes I’ve ever witnessed. Gehrig Conrad lost his father a couple of days ago, tonight in the 3rd round of the state playoffs he absolutely dealt! With two strikes his teammates gave him a hug and then he unleashed a 91 mph fastball. @StoneSports_T4L 🙏🏻 pic.twitter.com/6TxcPAHmx9

Friday night’s win went beyond baseball. Win or lose, Gehrig toeing the rubber two days after his father’s death was remarkable. For him go out and put on the performance that he did will send chills down your spine and bring tears to your eyes. Look at this photo. It looks like his father is watching over him from heaven in the batters box.

The game of baseball is so very special 🙏🏻 pic.twitter.com/iVFeMS7q7C

To make the weekend even more special, the Tomcats won on Saturday to advance in a two-game sweep. Stone High fell behind 2-1 through five innings and came back to score six runs in the top of the sixth. They recorded six-straight outs to win 7-2. Sports, man.