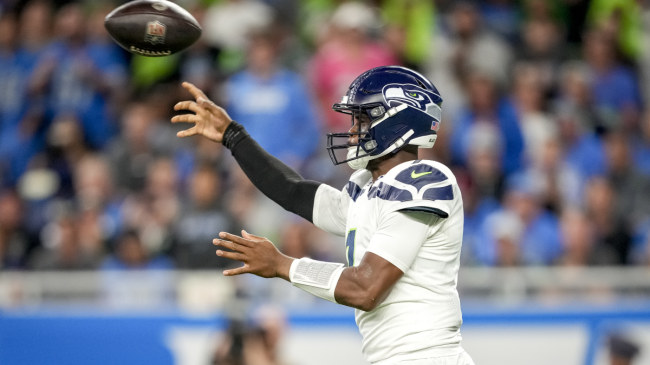 Geno Smith has a newfound confidence this 2022 season, one that the public is getting to see week after week.

It began in Week 1 after his team’s upset of Russell Wilson and the Broncos. Following that win, the quarterback was heard taking a shot at his haters.

“They wrote me off, but I didn’t write back.”

That swagger has grown as we enter Week 5 with Smith fresh off of his best performance of the year, one that earned him Offensive Player of the Week honors. He threw for 320 yards and two touchdowns in a 48-45 win over the Lions, and now has Seattle sitting at 2-2 on the year.

He’s carrying that confidence into his upcoming matchup with the Saints, and on Thursday, he gave the media another glimpse.

The passer was asked about his performance thus far in the 2022 season, and whether or not he’s surprised to be playing as well as he is. Obviously, Geno said no, trolling the reporter with an awesome response.

Reporter: “You’re in the midst of something we’ve never seen before in being a backup for 7 years now near top league in passer rating & just won POW”

Geno Smith: “You surprised by that?”

Reporter: “If you’d told me that before the season, I’d been a bit surprised.”

Geno: “That’s because you never watched me throw.”

Fans were quick to chime in on the quip, and they’re all here for Smith’s GOAT-like confidence.

“Talk yo s—!” said a number of NFL fans. Many seem happy for the passer, who’s spent the majority of his career in a backup role. It’s nice to see him thriving as a starter.

Of course, many can’t erase the memories of his days as a New York Jet. Scorned NYJ fans aren’t ready for this Geno.

Look. I understand Geno is feeling good right now. And that’s great for him, truly. He should. But I watched him play games for the Jets, ok? You can’t just wipe that from my memory. https://t.co/uI5SSTfnjY

We’ll see if he can keep the momentum rolling in Week 5 as he faces off against Jameis Winston.