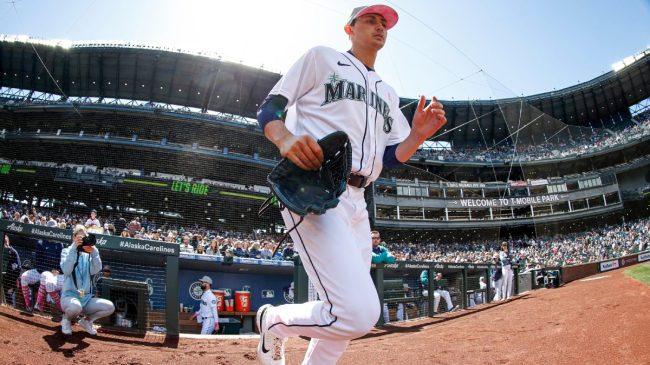 Right-handed pitcher George Kirby was scheduled to make a Double-A start on Saturday night with the Arkansas Travelers.

Instead, he was called up to make his Major League debut with the Seattle Mariners with the team making some moves on the roster. The Mariners had some room after optioning righty Riley O’Brien and having to place Ken Giles on the 60-day DL.

Kirby definitely has the credentials. He was a first-round pick 2019, going with the 20th overall pick following a career at Elon. In Double-A this year, he’s tossed 24.2 innings while posting a 1.82 ERA. Opponents are hitting just .195 off the flamethrower, and he’s struck out 32 batters.

But no one expected to see the show he’s putting on for Seattle.

Kirby has been downright dominant. He struck out the side in his first frame. Through four innings of work, the rookie has surrendered just two hits while sitting down five Rays hitters on strikes.

And not only is he recording outs, but he’s also making some Major League hitters look silly in the process.

George Kirby strikes out the side in his first professional inning

Kirby made light work of the top of the Rays’ order, sitting down Brandon Lowe, Randy Arozarena, and Ji-Man Choi.

First is Lowe, who he spins into the ground with a back breaking slider. He then makes Arozarena look silly with a half swing on a 97 MPH fastball. Finally, Choi goes down on a heater up in the zone.

That was just the start.

2nd MLB strikeout and already getting swings like THIS.

George Kirby seems okay if you like devastatingly awesome

George Kirby, good lord.
Pumping 98 mph heaters then strikes out Brandon Lowe on a nasty slider down and in.

He’s even got his own fan club at the game.

The George Kirby fanclub reacts to his first strikeout pic.twitter.com/fyd8eeB9Wz

Kirby has looked awesome to this point. Let’s see how far the Mariners let him go.