George Kittle On What He Learned From Travis Kelce And Other TE’s At Tight End University, The Niners QB Situation, And His ‘Home Base’ In Nashville 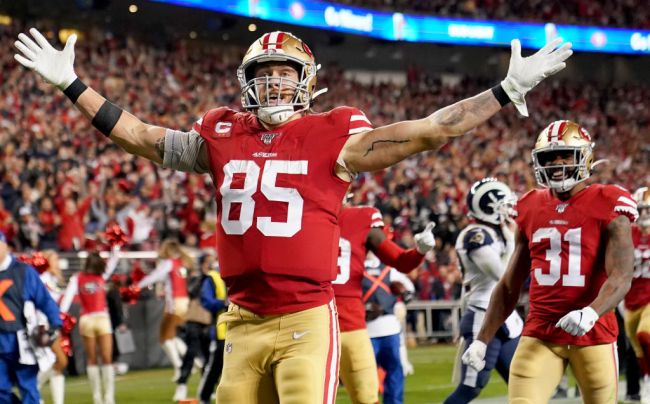 San Francisco 49ers All-Pro tight end George Kittle is pretty damn good on the field and now he wants to give fans a glimpse of how he’s living off of it.

Kittle and his wife Claire teamed up with USAA, the official Salute to Service partner of the NFL, and ESPN to talk about their “home base” in Nashville.

The ‘Home Base’ series, which airs on ESPN’s Facebook and YouTube channels, features athletes displaying their homes while talking about their connections to the military . The Kittles’ ‘Home Base’ episode has them showing off a seven-foot bear painting and explaining why that’s important to them as well as George’s state-of-the-art training facility that he built inside their home in Nashville.

We had the opportunity to sit down with Kittle to talk about Tight End University summit that went down over the summer, the Niners QB situation, and his connections with the military.

Over the summer Kittle assembled some of the best tight ends in the game to come work out together in Nashville. The number of tight ends who showed up to “Tight End University” quickly expanded to 50 and the players went on to share the tricks of the trade with each other while having a place to get in shape before the start of training camp. Kittle says that he learned a ton from players like Travis Kelce, Greg Olsen, and Marcedes Lewis during the three-day summit.

I’m pretty open minded, I know there’s a lot of things that I have no idea about, and just sitting in a room listening to Travis Kelce talk about second number releases or how he anticipates where defenders are going to be is incredibly interesting. Listening to Greg Olsen talk about him on the backside one v one versus a corner and how he’d run his routes off them based off the DB was incredibly interesting.

And honestly, my favorite topic was Marcedes Lewis going into year 17 with the Packers and I’d listen to him talk about longevity and how he’s lasted so long, and just his mindset every single day was incredibly interesting. So that was really fun for me just to hear those guys tal, and really the workout stuff, too, was fun. And it was more of you learned a lot at the same time you got to branch out, which was very fun.

One of the biggest stories this offseason featured the San Francisco 49ers drafting QB Trey Lance third overall in the draft. The Niners’ tight end and nothing but praise for the rookie QB who has impressed many during training camp.

He’s getting better every single day, that’s what you want from all your players, but when you’re a quarterback, you know, being a quarterback in our offense is difficult. There are a lot of words you have to memorize, you to got to know where to be at all times and just when a rookie can continue to improve day by day, it’s fun to see and I love just watching the competition,you know when guys are out there competing, having fun, but really getting better.

Despite drafting Lance in the first round, 49ers coach Kyle Shanahan has insisted that Jimmy Garoppolo will be the starting QB this season. Kittle offered some insight on how Garoppolo is handling the QB situation during training camp.

I just go out there and I catch a football for whoever is in the quarterback, Jimmy is doing a fantastic job right now with us. It’s his team, he’s our quarterback, and like I said, I just go to work and I catch the ball and I block people, but John and Kyle, they made the decision to draft Trey Lance because he’s a fantastic football player, and, you know, you don’t want to pass up that level of talent.

I don’t know what all is going to happen with it, but like I said, I just go out there and catch the ball from whoever’s throwing it. But like I said, Jimmy’s our quarterback and he’s been phenomenal so far, this camp, and I’m just looking forward to be back on the field with both of them tomorrow.

In his “Home Base” special Kittle goes into full detail on why the military is important to him. According to Kittle, his Uncle Pat, who served in the Army National Guard, was especially influential on his life and helped him appreciate spending time with his family when he’s away from football.

The military has always meant a lot to me. My grandpa was in the Air Force before I was born, and it meant a lot to me that he served. The really the big one was my Uncle Pat, who was in my life growing up early, still in my life to this day. He served two tours of duty with the Army National Guard and it was just having him around was always just fun because he would be gone for long periods of time, but when he came back, he was always just so full of energy and so grateful, so loving of his family and he always showed that love with all of us and it just made me really appreciate family in the moments that you get, because sometimes you don’t get to have those and you don’t ever want to take them for granted. So that was one of the big things I learned to appreciate all the moments you spend with the people that you love.