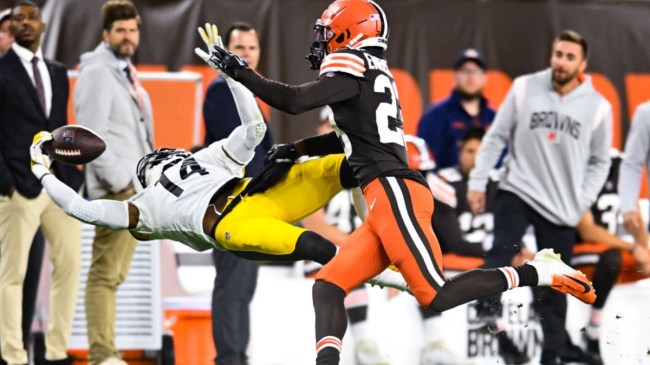 The Pittsburgh Steelers may have lost to the Cleveland Browns on Thursday Night Football last week, but that didn’t stop George Pickens from stealing the headlines in that game.

During the matchup with the Browns, Pickens made an unbelievable grab that had many football fans making comparisons to Odell Beckham Jr’s famous catch against the Dallas Cowboys.

GEORGE PICKENS, YOU ARE RIDICULOUS 😱

CATCH OF THE YEAR!
pic.twitter.com/9hpCJqI9qm

Today, Pickens talked about his catch and revealed that he doesn’t even rank it in the top 5 catches he has ever made. Instead, it sits at 7th on his list.

'That’s probably like seven. I made even crazier catches in college.' – George Pickens doesn't even rank his amazing catch against the Browns last week in the Top 5 catches he has made

I made even crazier catches in college. When I caught the ball, I made crazier catches before, so I knew I caught it. It was just a fact of what the world thought about it. I saw their input on the internet.

According to Pickens, he made some better catches during his time at Georgia and fans haven’t even seen some of them, but he did allude to one on Youtube and it seems the internet has already figured out which catch he was talking.

UGA, practice for real. One is on YouTube, you will probably see it. A lot of them are undiscovered.

Pickens said that there's a crazier catch on Youtube from a Georgia practice. I'm thinking this is what he was talking about.

I dunno, the Cleveland one seemed better. #Steelers @937theFan https://t.co/GTdSlCo4EZ

With how early in his career he is, we may see Pickens knock that catch against the Browns even further down his list before all is said and done.