Georgia Gets Big News On Both Of Their Top Two Quarterbacks 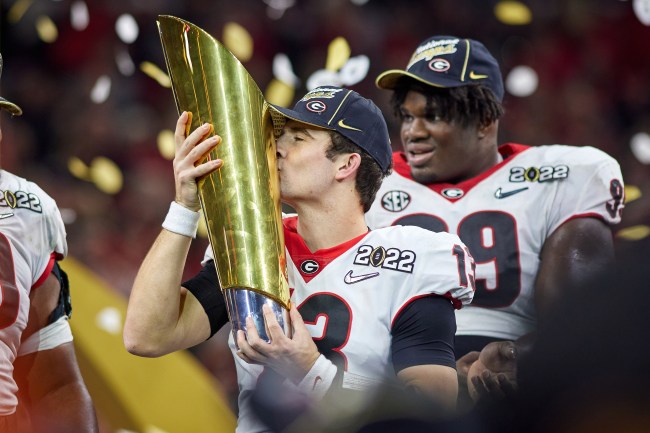 The Georgia Bulldogs just won the national championship for the first time in over 40 years, but it wasn’t that long ago that they were in the midst of a quarterback controversy. After their loss to Alabama in the SEC title game, there were some who were questioning whether Stetson Bennett or J.T. Daniels should start in the playoff.

Georgia stuck with Stetson Bennett and it obviously worked out for the best, but they were still left with questions for next season. Who would be their starter next season? Would Bennett stick around for another year? Would J.T. Daniels stay with the team after sitting on the bench of two years?

They got answers to all of those questions today. First, they found out that Stetson Bennett would be coming back to try and make Georgia the first back-to-back champions in College Football Playoff history.

Stetson Bennett is coming back to Georgia in 2022. pic.twitter.com/fUcaClv7TN

With Bennett back for another year, Georgia will once again find themselves among the favorites to win the national title and will be expected to get another shot at an SEC title.

It didn’t take long after that announcement to find out what J.T. Daniels was going to do. It was revealed today that Daniels would enter the transfer portal.

#Georgia QB J.T. Daniels is in the transfer portal.

J.T. Daniels enters a transfer portal that has been loaded with quarterback talent. He has struggled to carve out a starting role for himself in his college career, but there will certainly be a suitor out there for a former 5-star recruit.

There’s one thing we know for sure. Georgia is going to be a threat to the rest of college football again next season.