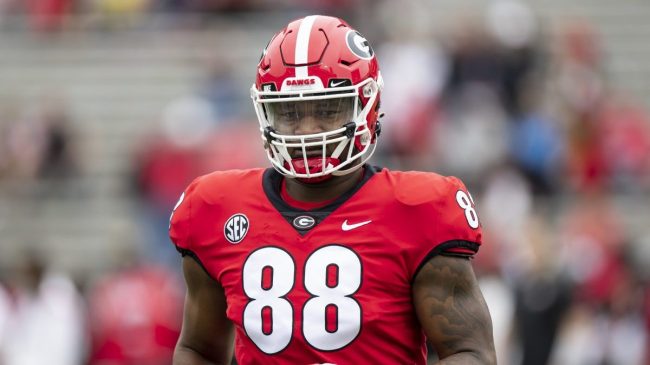 Georgia’s Jalen Carter may be the college football player in all of America. Sure, Bryce Young of Alabama is the reigning Heisman Trophy winner. Yes, Young’s teammate Will Anderson had 17.5 sacks last year on the way to winning the Bronko Nagurski Trophy.

But Carter is a game-wrecker in his own right. The 6-foor-3, 310-pound defensive tackle was a five-star recruit in the class of 2020. He rotated with stars Jordan Davis and Devonte Wyatt for the national title-winning Bulldogs. But he still managed to rack up 7.5 tackles for loss and three sacks.

Carter has taken his entire game to the next level in 2022. He dominated in Georgia’s opening-week blowout win over Oregon and teams have had to gameplan around him.

But now Carter finds himself in a bit of hot water.

The top-ranked Bulldogs entered Saturday’s SEC East contest at Missouri as a massive 31-point favorite. Apparently, Carter took that to heart as he interrupted the Tigers’ pregame warmups.

That didn’t sit well with a number of Mizzou players and not long after Carter and a few Georgia teammates found themselves in a squabble. While the altercation didn’t completely blow up, one punch was thrown and Carer had to be guided away by Georgia staff members and coaches.

WATCH: Jalen Carter, Georgia defenders get into a pregame scrap with Missouri as a punch was thrown by an unidentifiable Tiger: https://t.co/F8X2nxFGsD pic.twitter.com/0FbX1E9yCp

Whatever was said must have lit a fire under the Tigers. Missouri took a remarkable 16-6 lead into the half and still holds a 19-9 lead mid-way through the third quarter.

The confrontation is a tough look for a player who could go in the top five of the 2023 NFL Draft. And Georgia fans weren’t overly happy with his actions either.

Carter looks absolutely ridiculous doing this garbage. Should spend the time proving it on the field, but that’s not happening either. #GoDawgs https://t.co/nM4QxH62CL

This crap will always carry over in the game. You act like that before the game you play like it during the game. Be classy. https://t.co/tHvpL0t1oX

Aye bruh we don’t need that on my team https://t.co/AKr5AOUziC

A Missouri win would be one of the biggest upsets in the entire 2022 college football season. And Carter’s antics could land him at the center of attention for all the wrong reasons.