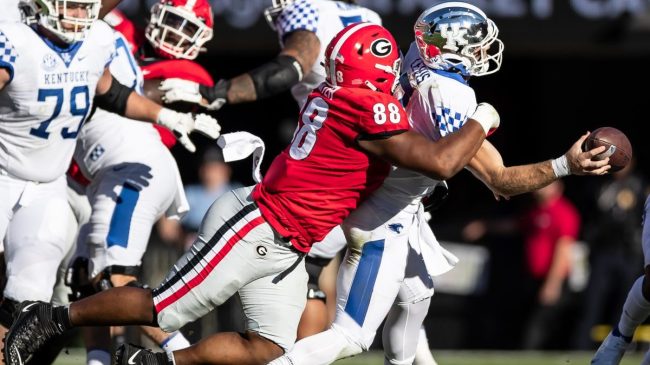 Kirby Smart and Georgia Bulldogs road an historically good defense to National Championship in 2021. It was the first national title for the Bulldogs since 1980.

But many of the stars of that defense are now playing in the NFL. The Jacksonville Jaguars selected Travon Walker with the No. 1 pick in the 2022 NFL Draft. Teammate Jordan Davis went shortly thereafter to the Philadelphia Eagles with pick No. 13. While Quay Walker, Devonte Wyatt, Lewis Cine, Nakobe Dean and Channing Tindall all also went inside the first three rounds.

But the the Bulldogs aren’t short of defensive talent in 2022. In fact, they’re far from in. Thanks in large part to star defensive tackle Jalen Carter.

Georgia DT Jalen Carter Looks Like The No. 1 Pick In The 2023 NFL Draft

While Allen, Davis and Wyatt were each fantastic in 2021, teammate Jalen Carter may have been the best defensive lineman of the bunch.

The 6-foot-3, 310 pounds defensive tackle had 37 tackles, 8.5 tackles for loss and three sacks. He’s considered one of the top prospects in the 2023 NFL Draft by most. And he showed off exactly why on Saturday against a poor Oregon offensive lineman.

The Ducks list senior right tackle Malaesala Aumavae-Laulu (No. 71) at 6-foot-6, 330 pounds. Nevertheless, Carter picks up the Oregon blocker and throws him aside like a small child. He then proceeds to change direction and make the tackle on the ball carrier.

All fans could do was marvel at Carter’s incredible athleticism.

Bears just be good enough so we don't fall 1 pick short of him lime Aaron Donald so I don't lose my mind please. https://t.co/ltJ9rKUmML

Oh damn lol. He just moved a very large human being like this. https://t.co/qQHnP2b5Pg

The Bulldogs entered the game as 16-point favorites over Oregon. The reigning champs entered the half with a 28-3 to lead.

It’s safe to say that Georgia is going to be a force to be reckoned with again in 2022. Maybe those oddsmakers might want to slow their rolls a bit before crowning the Alabama Crimson Tide.