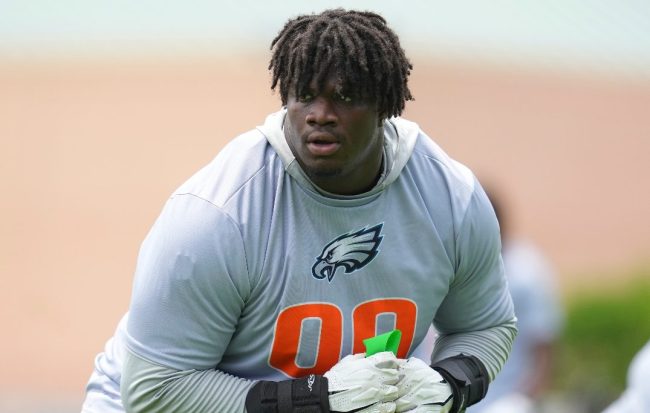 Jordan Davis has generated a ton of hype since the NFL Combine. After going berserk in the pre-draft process, the Philadelphia Eagles rookie made noise again after completely mauling his teammate Cameron Jurgens in practice. Now, Jordan Davis speaks on the viral video and he apparently isn’t a fan of it.

According to USA Today, Davis spoke on the viral video and straight up hates that it exists. When asked about it, the Eagles prospect states, “I hate it, honestly. I just feel like it’s very one-sided. You see one rep, but you don’t see Cam [Jurgens] blocking me and getting me at practice and getting me at the other reps. So I always say looks can be deceiving. One rep and it goes viral, whatever, but Cam is holding his own. He’s a very good player. It’s just been a competition.”

Jordan Davis makes a fair point. Typically camp videos don’t tell the whole tale. Even so, the Eagles prospect makes sure to let everyone know that his teammate Cameron Jurgens is doing just fine in practice.

Jurgens of course is filling in for Jason Kelce who is dealing with an injury right now. The Eagles are hopeful he’ll return by the time the season starts but that’s yet to be determined. Cam Jurgens is getting plenty of reps right now which is crucial for his development. Especially considering Kelce hand-picked the rookie as his eventual replacement in Philadelphia.

The Eagles likely enjoy what they’re seeing from both rookies, which bodes well for their long-term success. Jordan Davis proves he’s a great teammate by defending Cam Jurgens after the viral video. It’s a nice change of pace with the regular season approaching.