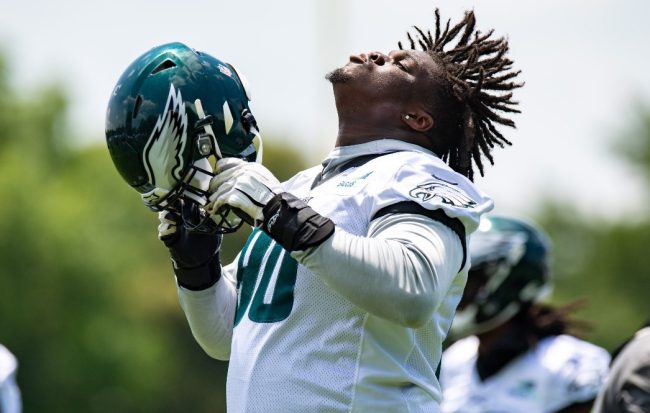 The Philadelphia Eagles had a tremendous offseason and are hopeful for a big year. After showing out at the NFL Combine, rookie Jordan Davis has continued to make noise in the Eagles’ training camp. On Sunday, the rookie proved he’s a force to be reckoned with after moving a 300-pound teammate like it’s nothing.

Okay, so Jordan Davis might be the strongest man alive. During a drill in the Eagles’ practice, the young rookie turned heads after pushing Cameron Jurgens back nearly 10 whole yards. Jurgens even tried dropping anchor several times before looking like he was wearing ice skates on the football field. Watch the video yourself below!

This is not easy to do at all. Try moving 300lbs of anything without pulling a muscle. It’s difficult. Regardless, the Eagles rookie made it look rather easy as he looked like he was just using the sled. Philadelphia has to be excited about their newly acquired rookie, as his potential is through the roof.

Davis took social media by storm during the NFL Combine after posting a 4.78 40-yard dash at 341 pounds. Clearly, this kid is a physical freak and somehow the Eagles drafted him 13th overall. This defense looks like it acquired a major player for the defensive line which bodes well for the future of this franchise.

Look for Jordan Davis to shine throughout the 2022 season. It’ll be interesting to see how he fits in the rotation as a rookie. However, considering we just witnessed him manhandle a 300-pound man like a toddler, Davis should be seeing the field often.