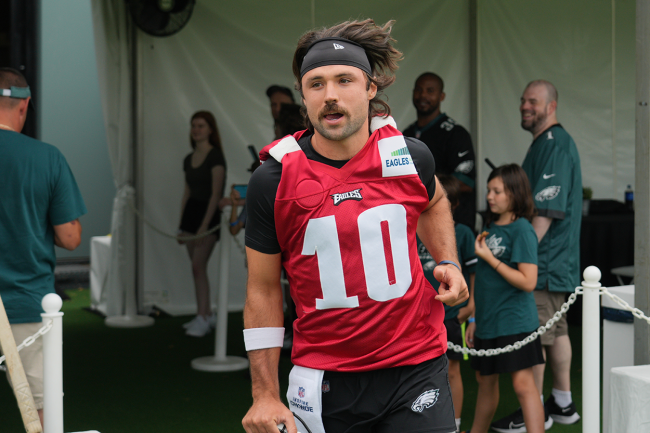 Gardner Minshew spent his entire NFL offseason living in a renovated bus. The 26-year-old recently provided an inside look at his living space over the last five months and announced that it is for sale.

Considering that most NFL quarterbacks did not live out of a bus during the offseason, Minshew is in a class by himself. As one of the most unique personalities in all of sports, he likes to stretch in nothing but a jock strap before games, refused to poop before a quarterback battle with Trevor Lawrence last summer, tried to break his own hand with a hammer to get an extra year of eligibility in college, and is learning to become a samurai after his grandma gifted him a sword for Christmas.

Now that training camp is underway for the Eagles, Minshew is back in Philadelphia to prepare for the fall. As a result, his time living out of a bus is over.

Details from his offseason are incredible.

The bus, which was once used to transport inmates from one facility to another, is totally tricked out to reflect Minshew’s style. It is equipped with a a bright orange couch, a 1970s-style bed skirt, all kinds of album covers on the walls, plenty of candles and a lava lamp.

He parked the bus right outside of his personal trainer’s gym in Florida and stayed there for nearly five full months. ESPN detailed his offseason and it was the most Minshew offseason possible.

Minshew would wake up at about 7:30am and would enjoy his microwaved breakfast and a cup of coffee. He’d hit the field for his first workout around 8:30am, which would last a few hours. From there, Minshew would take a break before getting away from the Florida heat and heading inside for his second workout of the day.

When he wasn’t in the gym, Minshew spent his time learning how to play guitar or reading Hunter S. Thompson’s “Fear and Loathing in Las Vegas” and George Mumford’s “The Mindful Athlete.” The gym at which he parked his bus backs up to a nature preserve, so he made a gravel pit and set up a hammock. There is also a brewery nearby the gym, so Minshew’s bus became a gathering spot for trainers and athletes after a night out.

As for his living conditions, Minshew plugged his bus into the gym’s power source to get his refrigerator, air conditioning unit and cooking station running. To shower, he would use the gym’s water supply and his own rinse kit, bathing himself outside in the open, wearing only compression shorts.

It was a perfectly Minshew offseason for the Eagles backup quarterback. His bus is now for sale at $25,000, but he is more concerned with it going to the right home.