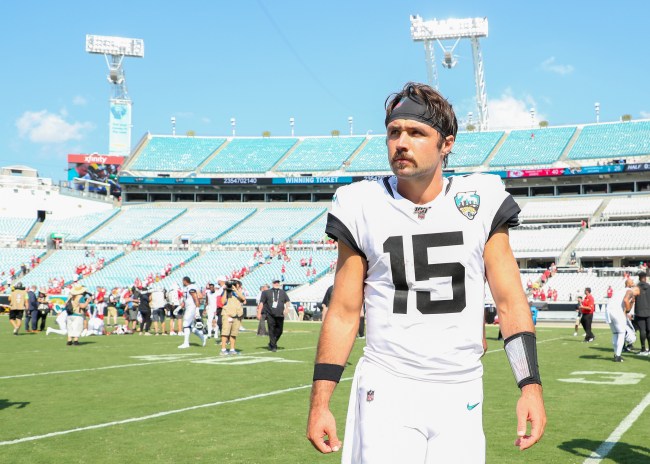 Jags QB Gardner Minshew has become the darling in the NFL after coming in to replace injured QB Nick Foles.

I don’t have this amount of confidence making coffee in the morning. Gardner Minshew is going to be a STAR, whether he’s good on the field or not. pic.twitter.com/2xIvTR6s2G

One of the best (and rarest) traits a person can have is simply being comfortable in their own skin. Gardner Minshew is that. And that’s why @Jaguars fans are going to love their new starting QB. pic.twitter.com/JK1EB4vqqe

The Texans are 7 1/2 point favorites over the Jaguars but I saw Gardner Minshew get off the team plane and I’ve got Jacksonville by 35. pic.twitter.com/OqRHUK3gBW

Of course it’s not surprising that someone who dresses like Uncle Rico has some weird habits.

According to Mike Garofalo, Jags players confirmed that Minshew stretched in nothing but a jock strap before today’s game.

Per @MikeGarafolo, #Jaguars starting QB Gardner Minshew III stretches in the pre-game locker room in nothing but a jockstrap. Again, our hero 🇺🇸🇺🇸🇺🇸

Jags source to me the other day: “Who even wears jockstraps, let alone stretch in just that? It’s awesome.” Point is they love the guy and the fact he’s his own person and doesn’t get flustered. That’s part of why they think they’ll be OK with him. https://t.co/bEUzVqAcCM

Apparently, this is something that he’s been doing since college.

Yes, Gardner Minshew also does exercise bands in the locker room wearing only a jock strap, shades, and a headband. Sometimes naked, too. Sometimes Steve Spurrier even walks in on him doing it https://t.co/e2ZFwk3aOT pic.twitter.com/ir63VnKPZJ